Skip to content
Destination of the Week Featured/Main article Travel

The London Eye, Lamb For Lunch & A Pub Crawl In Knightsbridge

LONDON, ENGLAND — I started to listen to The Clash a few weeks before my big trip to England.  London was calling, and our hotel was just a few tube stops away from the Thames, so for at least several days in a row, I too could say… “I live by the river.”  It really gets you in the mood, for being cold, fish and chips, cups of tea, rain, and great Indian food.

The more I visit London, the more I fall in love with that great and historic city.  It definitely has the hustle and bustle feel of the Big Apple, and you might have to kick it up a notch getting on and off the tube, mind the gap.

We usually take the nonstop from LAX to London Heathrow and it averages around 11 hours in the air.  I look at this as an opportunity to catch up on movies I haven’t seen yet, so the flight is three movies long, with a couple of TV shows thrown in there.

Once we land, I am usually jazzed and ready to get our suitcases and go.  On our last trip to London I told my lady we should be as touristy as possible, visiting everything we can in the time we have allotted.  There is so much history in London, and since it has been around for so long, a lot of museums, castles, palaces, old buildings, and things to do.  My favorite spot is right across the street from Big Ben.  Here in this park-like area, you can see the Houses of Parliament, Westminster Abbey, statues of famous historic figures, and the London Eye.  For me, this is the heart of the city, and a great place for photographs. We usually visit this section of town a few times before we come back to America.

Over the years, the one thing I have learned about British people is they love their Indian food.  This might have something to do with the Empire and their relationship with India, or who knows, whatever the case maybe, Indian food is beyond delicious.  Since I started hanging out with Britons, there has been a lot more tandoori in my life, and it really is a whole new world.

So we were off to one of the best Indian restaurants in all of London, the famous Quilon right next to Buckingham Palace.  This place was fancy, and if you showed up in a black tie and tuxedo you might still feel underdressed.  The first thing I thought is that the place was going to have fantastic sauces.  I love sauce, and Indian restaurants know how to make some of the best tasting stuff around.  The Quilon boasts a simple philosophy, which is a passion for south-west costal Indian cuisine.  I had never considered the food scene on the south-west coast of India, but the seafood recipes from that region are absolutely divine.

We started off with the pepper shrimps, which were batter fried prawns cooked in a fiery masala.  It was a great starter, but only made us hungrier.  Joanne ordered the Quilon fish curry, which has cubes of halibut simmered in coconut, chili, and raw mango sauce.  I decided since it was lunch; why not have the Malabar lamb biryani, a delicious lamb cooked with traditional Malabar spices in a sealed pot, with basmati rice.  Now believe me when I tell you, that dish will fill you up.  Their menu embodies a unique blend of ethnic and progressive dishes, and there is something on there for everyone.  This was a treat to eat at Quilon, and it should be on your list of restaurants to visit in London town. 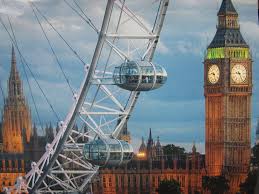 After lunch, we were off to the London Eye, which is within walking distance of Quilon and Buckingham Palace.  It was a great activity for right after lunch, so I packed up my leftover Malabar lamb biryani in a doggie bag, got a side of mango chutney for later, and waltzed out into the rain to battle the elements on the walk over.  Now there is something very special about the rain in England, just like in Forest Gump, when Tom Hanks is describing the precipitation in Vietnam and how it comes from all angles. Well that happens in the United Kingdom, and the rain in December is cold.  So there would be times when we are standing in a tube station, and it was still raining on me.  How this happens I have no idea, it is like Harry Potter magic.  We would be walking down the street in London, with an umbrella big enough to start a business at a swap meet, and I would still be getting pelted in the face with stinging little raindrops. 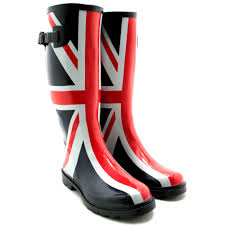 I have never claimed to be very smart, or to be evolving slowly if at all, but it seemed like everyone in London was wearing waterproof rain boots.  I however was wearing a pair of Vans I bought in the San Fernando Valley, and my feet were soaking wet.  Joanne informed me that everyone really was sporting waterproof boots called “Wellies” because it rains a lot and they keep your feet dry.  Well, I now knew what I wanted for Christmas, and maybe if I was nice, Father Kringle, or whatever he is called over there would bring me some rain boots.

We were off to the London Eye, with bags of Indian food and my soaking wet feet.  Joanne was wearing her “Wellies” and her feet were as dry and snug as a bug in a rug.  Someday I too would own “Wellies” – but until such time it was off to a really slow Ferris wheel.  I wondered how much we could see if it was gray and rainy, but just as we arrived from our 15-minute walk from Buckingham Palace to the London Eye; it cleared up and stopped raining.  I needed a cup of tea.

The view is absolutely incredible.  The sky opened up and you could see for miles and miles.  The Houses of Parliament and Big Ben looked totally cool from up there, and it was just the right amount of time to go around once and see the city.  There is also a neat short 3D movie with interactive bubbles after the once-around, and that’s something I recommend checking out.  It comes with the ticket.

We had officially played tourist long enough for that day, and it was off to our beautiful hotel in Knightsbridge.  Now this is a really nice part of town, and I was looking forward to a hot shower and several cups of tea.  There is something about the UK that makes you want to drink tea.  It might be the temperature outside, the rain, whatever the case happens to be, cups of tea are great.  So after the tube ride to Knightsbridge, and as we are checking into The Cadogan, the nice man behind the counter offered us tea and cucumber sandwiches, and to take our bags to the room.  How did he know? Yes to all of the above.

This was a lovely touch, and made me want to stay at The Cadogan again, and I hadn’t even seen the room yet.  Maybe it was the wet Vans talking, but hospitality goes a long way, especially at certain times.  So we enjoyed some tea and finger sandwiches as we checked in, then it was off to get settled in our hotel room.  It was more of an apartment, with a living room and full family room.  This place had it all, including several fancy awesome looking contraptions in the shower area.  Now being from America, it is sometimes hard for me to figure out things in European bathrooms.  But just like a fun little puzzle you might receive in your Christmas stocking, I always have a go at it.

Joanne was in the other room planning a pub crawl with her brother and best friend, and I was finally going to get to take off my wet socks.  The shower was amazing, as was the property in general.  Everything is top of the line, and staying at The Cadogan is a great pastime in and of itself.  The place has an old classic feel, and is right in the heart of Knightsbridge.  The following morning, after a night of painting the town red, we experienced one of the greatest English breakfasts known to man.

There is nothing like a proper English breakfast, which usually includes sausages, back bacon, beans, eggs any style, toast, fried tomatoes, fried mushrooms and a healthy helping of black pudding.  You will not leave hungry, and there is always enough tea, coffee and orange juice to accompany this classic English staple.  The breakfast is second to none, and should be enjoyed with elegant company who can appreciate the finer things in life.  I could have stayed there all day, and had it for lunch and dinner.  A proper English breakfast is that good.

After spending a day or so in London, it was off to see Joanne’s family in the Midlands.  There would be fun and laughter up north, and lots of tea, but nothing can beat some time in London town.  Whatever you want to see and do, just plan it out and then execute your plan.  I wanted to eat some really fantastic Indian food, go on the London Eye, and stay in a fancy hotel.  Others might want some fish and chips and to go check out the museums.  Whatever tickles your fancy, London has it all.  It is a fantastic city and I just can’t wait to get back there.  (For more information, please check out www.cadogan.com)