Skip to content
Destination of the Week Featured/Main article Travel

SAN FRANCISCO, CA — If you’re going to San Francisco, be sure to wear a flower in your hair.  So says Scott Mackenzie, but there is something about that city that makes you want to throw up a peace sign and listen to some Grateful Dead.  I love San Francisco, and having a sister there to visit gives me an added incentive to drive up the 101 and get a clam chowder bread bowl from Fisherman’s Wharf. 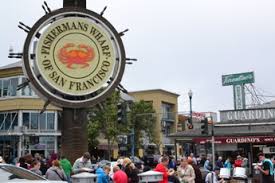 In fact, the world famous wharf is absolutely perfect for people watching, if you were so inclined to participate in such an activity.  And besides the fascinating humans, the top notch seafood, the location on the bay, and the shopping, there happens to be an arcade right there as well.

The city was calling and left a couple of voicemails, and it was time for another road trip, up to San Francisco for some clam chowder and people watching.  I don’t know what it is, but for some reason I just love being close to Fisherman’s Wharf, and our hotel could not have been any closer.  We chose the Hotel San Remo, which might just be San Francisco’s best kept secret.  It is a hidden gem, right there in plain sight, and offers a one of a kind experience.

They buzz you in through the door and it is up a flight of stairs to the front desk.  This experience had an old New York Italian feel to it, I wanted a meatball sandwich right then and there.  Once we said our hellos and got our room keys, it was off to check out the digs.  It had an old world ambiance and made you feel like you were in a different time.  The rooms were well furnished, and just perfect for resting and sleeping when not exploring the city’s attractions.

They have a restaurant on the ground floor, and it is located in a quiet neighborhood between North Beach and Fisherman’s Wharf.  For me, the best part about staying at Hotel San Remo was the massage chair right outside my room, and the location.  We were close to everything, and there was a cable car stop just a few minutes’ walk away.

When I travel to the city by the bay, there is really only one thing I must do, and that is get a clam chowder bread bowl from Fisherman’s Wharf.  Now there are between five and seven vendors that sell this delicious wonderful great invention of a food, and I have tried them all.  Actually, they are all good, and each one has something a little different, maybe the sauce, maybe the size of the potatoes, but they are all super delicious.  I usually just rotate which ones I buy from, and try to get at least three or four bread bowls in on each trip to San Francisco.

After scheduling my weekend around clam chowder, there is another favorite activity I usually have to partake in, and that is a cruise around San Francisco bay.  I like to use the company “Red & White Fleet” when I cruise the bay.  They have been around forever, and offer very reasonable prices as well as numerous times throughout the day for the different cruises.

The one hour Golden Gate Bridge cruise is my favorite.  You can enjoy stunning views of the Bay and Alcatraz without ever having to leave the ship. The Golden Gate Bay Cruise is a true San Francisco original and is accompanied by insightful headphone narration available in 12 language options.  I like to listen in Spanish or French, to feel more cultured, plus it seems more exotic as well.  But the narration in English is quite informative and gives you a historical perspective of the Golden Gate Bridge, Alcatraz, and the beautiful city of San Francisco.  The Golden Gate Bay Cruise is offered eight to twelve times daily starting at 10am.

After this wonderful cruise around the bay, it was time for some lunch.  And one of the most historic and delicious restaurants in all of San Francisco is the Cliff House.  This place is literally built over and perched up upon cliffs, hence the name. 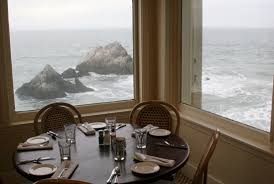 We met my wonderful sister for lunch, and even as a native San Franciscan, she was in a continuous state of awe, it really is a beautiful place.  I am a lover of seafood, and the Cliff House is known for its spectacular views and award winning seafood.  I ordered the Cliff House Louis, a classic favorite with Dungeness Crab.  Wow, every bite was amazing, and I can see why this particular sandwich is famous throughout the city.

It was back to the Hotel San Remo for a nap, because with it being a double boat day, we were going to need the rest.  After watching Sesame Street, catching some shuteye and having some milk and cookies with my favorite stuffed animal, we were off to go check out Alcatraz Island at night.  I was very excited, had just watched “The Rock” in anticipation of this visit to Alcatraz, and my digital camera was fully charged.  I was ready to go, and you know it must be cool because my sister joined us, and she lives in San Francisco.

This tour is amazing, and not to be missed the next time you are in the city.  The night tour is a unique program limited to just a few hundred visitors per evening.  It lasts about two and a half hours, and is full of information and includes: roundtrip ferry transportation, a live boat narration, a guided tour from Dock to Cellhouse, the Cellhouse Audio Tour, a keepsake souvenir brochure, recreation use fee, and a variety of special programs and presentations offered only at night.  I had the most excellent time, but the thing that struck me as the most interesting, was the sounds of the city from the rock.  You can only imagine what it must have been like to be locked up, and hear so much music and laughter coming from just across the bay.  The views of the city at night are also quite spectacular, and might even be cause to use that panoramic setting on your camera.

There is so much to see and do in San Francisco, and many different sections of the city with diverse and interesting backgrounds.  If you are looking for some peace and love, the Haight Ashbury section of town will definitely satisfy your inner hippie.  If you have never been, doing a bay cruise is a good way to start off, but this only really scratches the surface.  I have spent some serious time in San Francisco, and it just doesn’t get old.  Also, be sure to pack a jacket, as Mark Twain once said,…”The coldest winter I ever spent was a summer in San Francisco.”  (For more information, please visit www.sanremohotel.com)