Spectacular Splendor In The South Of France

BIARRITZ, FRANCE — From the mid-19th century to the 1920s Biarritz, on the south west coast of France close to the Spanish border, was the most popular tourist centre in Europe for the rich and famous, including members of the British royal family. The waters of the Bay of Biscay were alleged to have therapeutic properties.

Its popularity waned as the Cote d’Azur on the Mediterranean round Nice, Cannes and Monaco took over the mantle of the place to be seen.

Nowadays much of the splendor still survives and the beaches are increasingly popular with tourists, especially the French, and the wild waters north of Biarritz round Capbreton and Hossegor have become prime destinations for surfers.

Many of the old palaces and residences from the early days have become top class hotels. Empress Eugenie, wife of Napoleon III, built a palace on the beach and it is now the Hotel du Palais facing the wide sweep of the Grande Plage. Another imposing hotel is the Palais Continental. The Byzantine and Moorish style Eglise Ste-Eugenie was also built for the empress.

Grand old mansions, some reminiscent of follies in the English countryside, sit atop cliffs looking down on the promenade along the beach. The southern end of the beach leads to the small fishing port (Port des Pecheurs) which is now mainly used for pleasure craft and the rugged promontory Pointe Atalaye and the Rocher de la Vierge (Rockof the Virgin)

Trendy, well-dressed people stroll along the promenade, or indulge in some retail therapy at the expensive boutiques around the central Place Clemenceau

Biarritz is part of a continuous urbanisation stretching from the Spanish border at the most popular beach at Hendaye through St Jean de Luz and on to Bayonne, the major city of the area.

The wide, flat sandy beaches are packed during the summer months but by Australian standards are not all that great. The wind often sweeps in from the Bay of Biscay which makes some stretches excellent for surfing. The best beaches are at Hendaye, Guethary, Bidart, St Jean de Luz, Biarritz and Anglet; colourful beach cabins are popular. During the summer it is often difficult to find a place to parking place especially given the number of campervans that descend on the beaches.

To the north of Biarritz and straddling the Adour and Nive Rivers is Bayonne the regional and cultural capital of the French Basque region. The old town is divided into Grand and Petit Bayonne and is a pleasant place to wander along the narrow streets. Everywhere you go the skyline is dominated by the twin steeples of the imposing Gothic Cathedral Ste-Marie. The old town is surrounded by fortifications and you can walk along the grassy top of the ramparts admiring the scenery of the old town and rivers. Bayonne has an excellent free bus (Navette) which is great for exploring the city area. 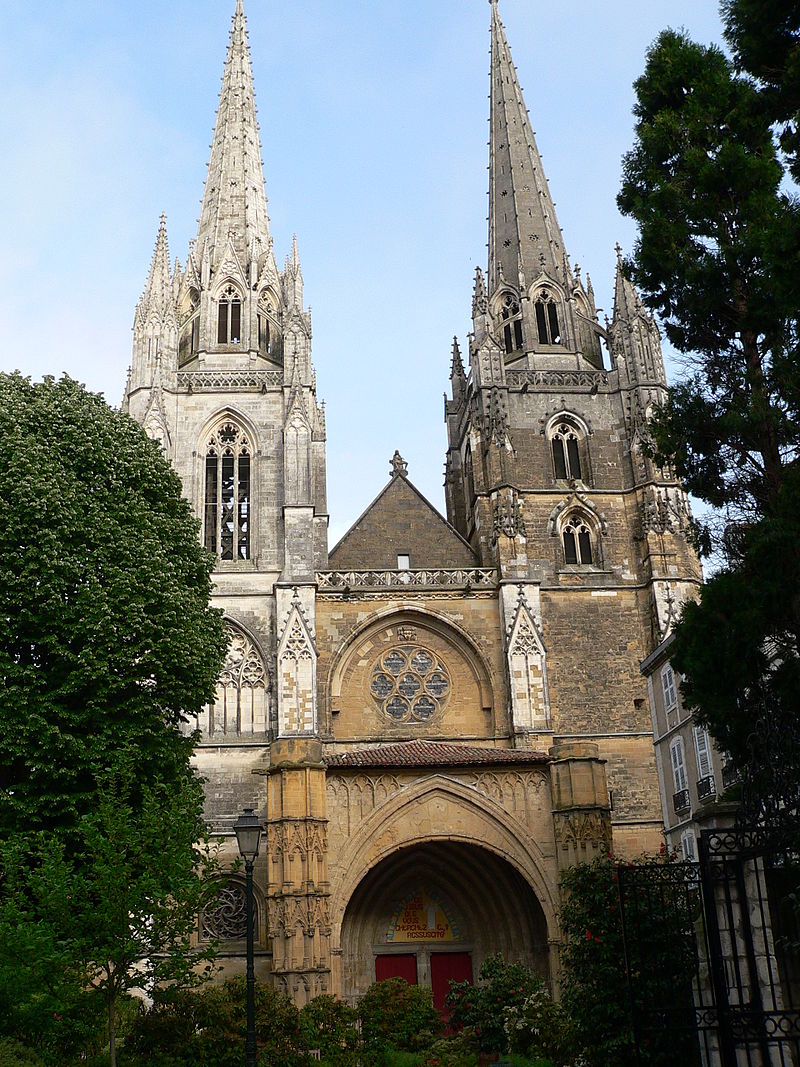 Cathedral Ste-Marie at Bayonne across River Nive is famous for its ham and chocolates. These specialities are available throughout the city at markets and also shops such as Cazanave (chocolates) and Brouchican (ham) are worth seeking out. Bayonne holds a chocolate festival each year at the end of May and a ham festival at the end of July.

The Basque country is also known for the sport of pelote; there are still some courts (like a royal tennis court) in Bayonne but I found it difficult to track them down when I wanted to see the game in action.

There are some large supermarket complexes at Bayonne including a huge Carrefour which sells everything one could possibly need. Surprisingly the supermarket was not open on Sunday and also many smaller shops and many other businesses still shut for up to two hours in the middle of the day. Tradition dies hard.

Many still speak the Basque language but not so many men nowadays wear the traditional flat beret. We stayed at a small pension in Bayonne owned by a Basque speaking teacher whose three children all went to a school where Basque rather than French was spoken.

On the northern side of the Adour the coast round Capbreton and Hossegor is worth a visit. Both are pretty ports with narrow shopping streets lined with souvenir shops, cafes and restaurants. As with many small towns in France the local tourist offices are a source of much excellent information and advice, maps and even arranging accommodation if required. Inland from the beaches are many timber plantations and pretty villages such as Leon and Castets.

Inland from the coast round Biarritz and Bayonne the rolling countryside leads up to the Pyrenees and small towns like Ainhoa, Espelette (famous for red peppers) and St John Pied de Port. The tourist office at Bayonne has brochures with suggested drives which can easily be accomplished in a day.

We drove briefly into Spain at Irun and crossed back into France over the Pyrenees to Ainhoa, a lovely village with the shutters of the houses painted in red, blue and green. The planter boxes full of flowers were typical of many of the villages in France – small towns really take pride in their displays. The large church was interesting because of the unusual two levels of galleries. The gently rolling countryside leads through places like St Etienne de Baigorry (a lovely detour can be made to the Vallee des Aldudes) to St Jean Pied de Port which is famous as a point of convergence in France to a starting point for the pilgrimage through Spain of the famous Camino de Santiago de Compostela. We saw a number of ‘pilgrims’ walking purposefully along the path, mostly alone, with one man pulling his gear on a trolley. Many of the signs along the roads are in Basque.

It was market day in St Jean Pied du Port (always try and find out when local markets are on) and the stalls were groaning with salamis, hams, cheese, traditional Basque cakes, liqueurs and wine. We bought some tasty local cheese Tonette. Other stalls had colourful tablecloths, mats and towels. 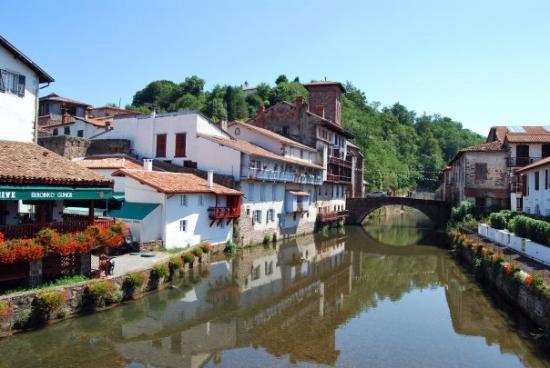 Taking the cure is still popular in France and given the number of cars in the car park the spa facilities at Cambo les Bains appeared very busy even early in the summer.