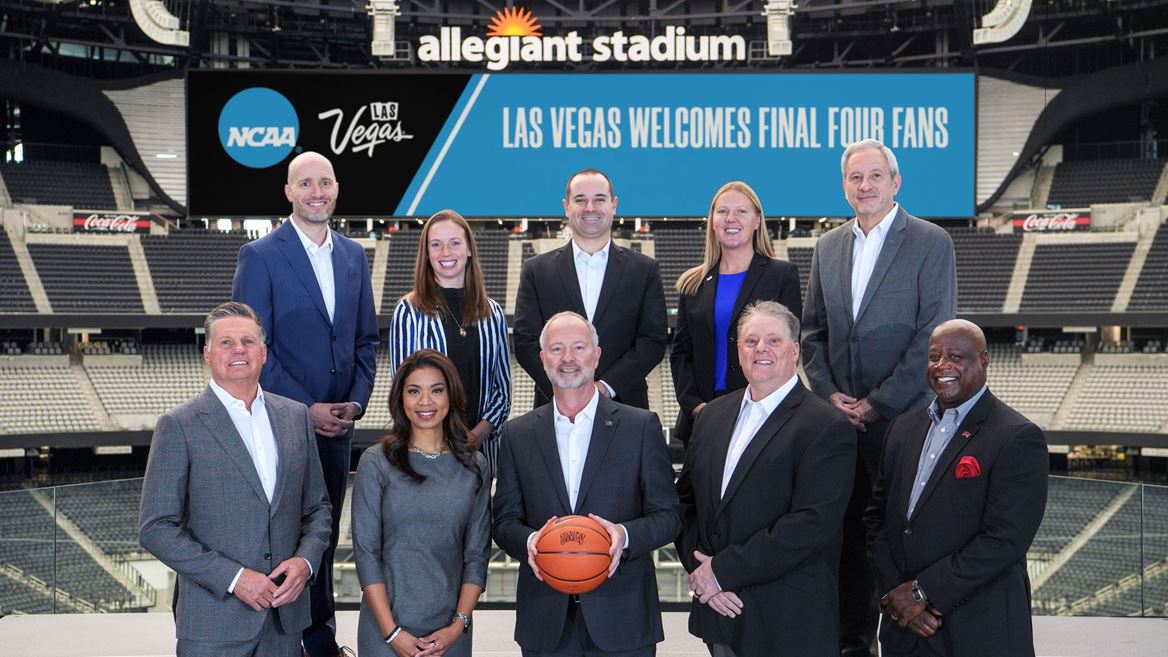 LAS VEGAS, NV — Las Vegas has been selected as a host site for the 2028 NCAA Men’s Final Four™, marking the first time it will host the collegiate basketball championship.

Games will be played April 1 and 3, 2028 at Allegiant Stadium, the $2 billion, 65,000-seat global events venue located adjacent to the world-famous Las Vegas Strip.

The announcement further solidifies Las Vegas as The Greatest Arena on Earth™, following successful marquee events this year including the NFL Draft and the NFL Pro Bowl. Las Vegas will also host the Formula 1 Las Vegas Grand Prix in 2023 and Super Bowl LVIII in 2024. The ability to present college basketball’s most-viewed event is due in part to the completion of Allegiant Stadium in 2020.

“The Raiders are thrilled to welcome the NCAA and college basketball fans from around the world to Las Vegas and our home at Allegiant Stadium,” said Sandra Douglass Morgan, president of the Las Vegas Raiders and Las Vegas NCAA Final Four bid team. “Our facility is a state-of-the-art, ideal venue for world-class sporting events.”

“We couldn’t be more excited to be a part of hosting the NCAA Men’s Final Four in Las Vegas at Allegiant Stadium,” said UNLV Director of Athletics Erick Harper. “Our city has been a hub for basketball on all levels for many years and now to welcome one of the premier events in all of sports is a culmination of how Las Vegas has truly become the Sports and Entertainment Capital of the World. We look forward to working closely with the LVCVA and the NCAA to put on an amazing event like our city is known for.”

“We are excited to bring the NCAA’s premier championship to Las Vegas, a city that for a number of years has hosted numerous championships from several member conferences,” said Chris Reynolds, athletics director at Bradley and the chair of the committee. “The feedback from leagues, the fans of their teams and the media covering the events staged there has been overwhelmingly positive, and we are confident we’ll get the same reviews when the Men’s Final Four is played at Allegiant Stadium.”

“The Final Four is one of the marquee events in sports and we are thrilled to have the opportunity to be the host in 2028,” said Steve Hill, CEO/President of the Las Vegas Convention and Visitors Authority. “The excitement of Final Four basketball combined with the energy of Las Vegas will create an unforgettable experience for teams and fans alike. We can’t wait to welcome the Division I Men’s Basketball Championship to the Greatest Arena on Earth.”

Planning has already commenced for this momentous event, which features volunteer opportunities for the Las Vegas community and dedicated visitors to the destination. Those interested can register here.