By Roger Allnutt, Special to the Van Nuys News Press

CAMBODIA, ASIA — It is ten years since I visited Cambodia the “Kingdom of Wonder” and although there have been improvements since that time the majority of inhabitants of the country are still desperately poor. In the capital Phnom Penh and other larger cities like Siem Reap and Battambang there have been major improvements in infrastructure with a number of excellent hotels being built to cater for the rapidly increasing number of tourists.  However the terrible legacy of the time of Pol Pot and Khmer Rouge army still seems to haunt the country where many people are illiterate, families live on less than $2 a day contrasted with the obvious wealth of a small ruling class. The Prime Minister Hun Sen has held that position since 1985.

Phnom Penh is a relatively small city by Asian standards with the population of around 3 million located along the banks of the Mekong and Tonle Sap rivers that meet there. The international airport is only about 10km out of the city but traffic on the few major roads is horrendous. Most people ride motor bikes, sometimes whole families plus odd animals and other gear all crammed together.
The main attractions of the city are centred round the Royal Palace and National Museum which are close to Sisowath Quay on the waterfront, a favorite place for an evening promenade. Look out for the ladies selling lovely floral bouquets and lotus leaves for the many temples, family groups gather along the riverbank, a colorful parade of street hawkers (you can try the barbecued beetles, bugs, snakes or a spider of two), courting couples, and masses of children.

The Royal Palace is a major complex including the famous Silver Pagoda and is Phnom Penh’s most iconic building and well worth a visit. The National Museum comprises four linked galleries around a lovely garden courtyard and houses a rich collection of artefacts from prehistoric times to the present.
A bit further north along the river Wat Phnom is the main temple and the grounds are a popular spot for locals. It is located in the old French Quarter and many buildings of the colonial era (the French left in 1953) still remain.
The Foreign Correspondents Club of Cambodia near the Royal Palace was the place from where most journalists reported the war in the 1970s and it is a good place for a snack and a drink although most of the patrons appeared to be other tourists. There are plenty of restaurants and the food is invariably excellent and inexpensive. The streets running at right angles to the river north from the Royal Palace teem with tiny shops, bars, restaurants and markets – a fascinating area to wander.

Many will have seen the film ‘The Killing Fields’ and the place where some of the worst atrocities took place are close to the capital at Choeung Ek. Dominating the area is a large stupa that is crammed with layer upon layer of skulls, a sobering memorial to one of the darkest periods of recent history. If that is not enough then a visit to the Genocide Museum at Tuol Sleng Prison (once a high school) only confirms the extent of the inhumanity of the Khmer Rouge. .
For years the choice of accommodation in Phnom Penh was limited mainly to guest houses and small hotels. Nowadays there are a number of upmarket hotels including Raffles Le Royal, Sofital Phokeethra, Himawari Apartments and I enjoyed my stay at Hotel Cambodiana. A large conference and exhibition area has been built on Diamond Island.

Most visitors to Cambodia concentrate on Phnom Penh and Siam Reap the town close to Angkor Wat. Although it is possible to fly between them a better option is the five-hour ferry ride on the Tonle Sap River (which joins the mighty Mekong River at the capital) and across the lake of the same name before arriving at Siem Reap. During the first couple of hours you pass a succession of fishing villages; many people live on boats or on houses built on stilts.
Siam Reap is a neat town that makes its living from tourists visiting Angkor Wat and also from the production of fish paste. It has a lively market, plenty of good restaurants and the number of hotels catering to the vast hordes of tourists is amazing. Many hotels are four or five star and yet the prices for many are very reasonable. I stayed at Sokha Angkor Hotel which is ideally located in the centre of town and not far from the airport and Angkor Wat. A highly recommended boutique hotel is NitabyVo which has the added attraction of views of the temples at Angkor Wat from the rooftop pool. 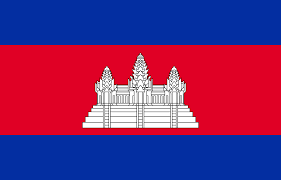 The number and scale of the temples is overwhelming, as is the number of tourists each day. The complex of temples, lakes and irrigation channels was constructed during the period of Khmer civilization that dominated Cambodia and eastern Thailand for about 500 years until the 15th century but was hidden by jungle growth until discovered in 1860. Due to the civil war Angkor has only been open to tourists again since 1994.
The main complex is Angkor Wat (meaning capital temple) and it is worthwhile getting there in time to watch the sunrise over the buildings when the lotus shaped temples are reflected in the pond near the entrance. Inside the walled compound are a myriad of temples, frescoes with scenes from daily life and wars, incredibly steep steps, even a monk or two in saffron robes. In the heat and humidity it is quite exhausting clambering up and down to get the best views; to protect the infrastructure from crumbling due to the number of tourists some areas are closed off and wooden walkways and stairs erected). 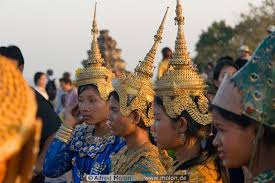 Close to Angkor Wat are other beautiful temples. Bayon is especially attractive with carvings of the face of Buddha a feature. Close by is the wonderful Terrace of Elephants, a bas-relief frieze of elephants stretching some 300 yards.
The temples at Ta Prohm (used in the film ‘Tomb Raiders’) are still covered by trees some with amazing root systems that seem to grow straight out of the temples; it gives you an idea of what Angkor Wat must have looked like before the growth was cleared away.
A must see at Siem Peap is a performance by the amazing Phare Cambodian Circus. Developed by the Phare Ponleu Selpak NGO as part of their program to assist vulnerable local children through various arts the one hour show, a mix of story-telling through acrobatic and gymnastic skills all done with incredible energy, vitality and humour, leaves you totally gobsmacked. I was so impressed I went on two successive nights.

The second city of Cambodia is Battambang about a six hour drive north of Phnom Penh. Along the way you pass a number of villages where traditional crafts are still pursued eg silversmiths at Kompong Luong, pottery at Kompong Chhnang and marble carving at Pursat. There are many temples (eg Phnom Udong and Phnom Banan) some requiring climbing hundreds of steps to reach the stupas.
Battambang is a relaxing overnight stop and many of the French colonial buildings still remain along the Sangker River. A Peace Monument built in 2007 to commemorate the end of the civil war is made entirely of guns and gun parts left from the conflict.
A fun trip out of Battambang is the quaint Bamboo Railway. You ride on an 8km stretch of disused track on a simple four wheeled undercarriage with detachable wooden platform on top – cushions for comfort – at around 40kph through the local vegetation.