Protecting the Progress We’ve Made with Wall Street Reform

WASHINGTON, DC — In this week’s address, Senator Elizabeth Warren joined President Obama to discuss how far we’ve come since the financial crisis, when the recklessness of Wall Street caused millions of Americans to lose their jobs, homes, and savings. Senator Warren underscored the importance of the Wall Street reforms the President signed into law, which included the strongest consumer protections in generations. In addition to making the financial system safer and more resilient, these reforms also established the first-ever Consumer Financial Protection Bureau (CFPB), which holds banks, credit card companies, mortgage lenders, and others accountable, and protects consumers from abuses and deceptive practices. This past Thursday, July 21, marked six years since the President signed the Dodd-Frank Wall Street Reform and Consumer Protection Act into law and the five year anniversary of the creation of the CFPB. Thanks to these reforms, the President reiterated the economy is stronger and more durable today than it was before the crisis. That’s why President Obama is going to keep fighting to protect the progress we’ve made reforming Wall Street from attacks, because hard-working Americans who play by the rules should expect Wall Street to play by the rules, too.

POTUS: Hi, everybody. I’m here with Senator Elizabeth Warren, one of our strongest advocates for families and consumers like you. Today, we want to talk about some of the actions we’ve taken to protect everything you’ve worked so hard to build.

Eight years ago, after some big banks made irresponsible and risky bets with your money, we almost slipped into another Great Depression. While the recklessness started on Wall Street, it didn’t take long before it led to real pain for folks on Main Street. It would cost millions of our fellow Americans their jobs, homes, and savings. 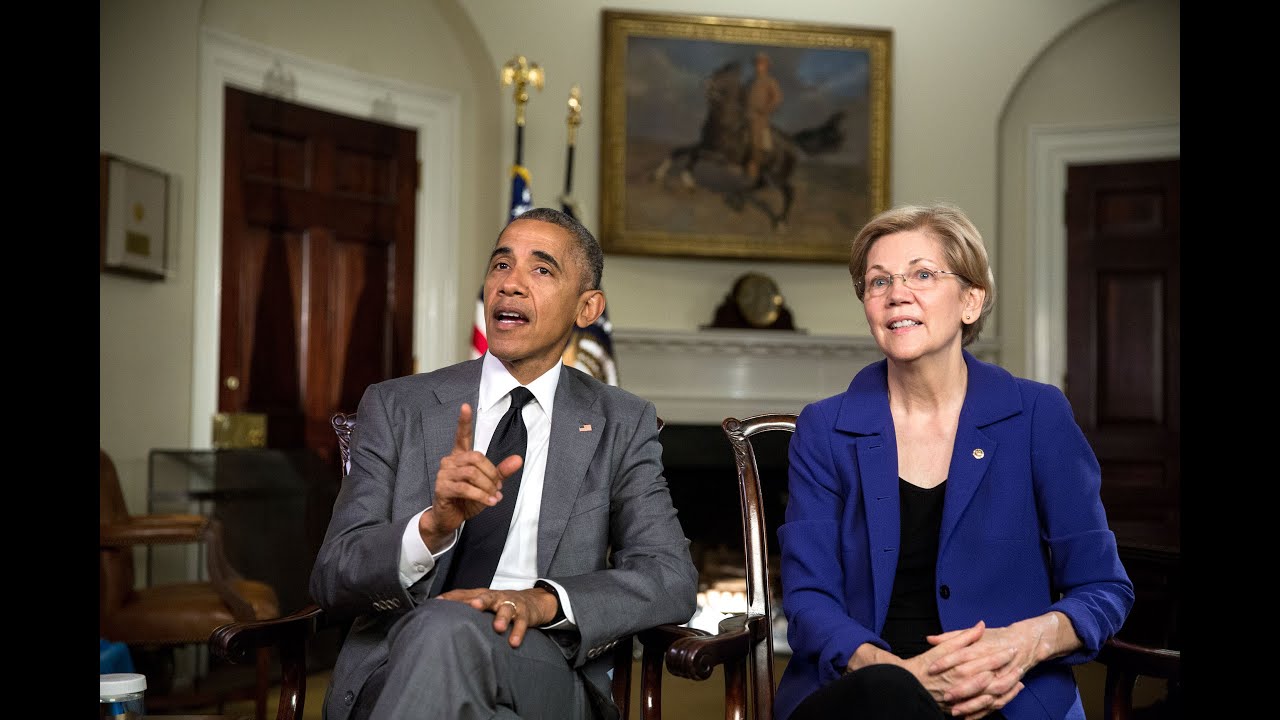 WARREN: The financial crisis wasn’t an unstoppable act of nature. The whole thing could have been avoided, but we didn’t have the rules in place to stop Wall Street from taking enormous risks that threatened the economy. We didn’t have strong protections to keep consumers from being cheated by tricks and traps on financial contracts.

POTUS: So when I took office in the darkest days of the crisis, I promised you we wouldn’t just recover from crisis – we’d rebuild our economy on a new foundation to make sure a crisis like that never happens again.

WARREN: President Obama delivered. He signed into law the toughest Wall Street reforms and strongest consumer protections in generations. Trust me – I’m a pretty tough grader. These new rules are making our financial system more transparent, getting rid of a lot of fine print, and making sure that if a bank screws up, you have someone to call so you don’t get stuck with the bill.

POTUS: These reforms have already made our financial system safer and more resilient. And part of passing those strong consumer protections meant establishing the first-ever Consumer Financial Protection Bureau, based on an idea that Senator Warren came up with before the crisis even began.

WARREN: Every day, the good people at that independent agency crack down on dishonest and deceptive practices like the ones that helped cause the crash. The proof is in the more than 27 million consumers who in just five years have gotten refunds and other relief from credit card companies, payday lenders, debt collectors, and others that tried to rip them off.

POTUS: Before the Consumer Financial Protection Bureau, you didn’t have a strong ally to turn to if your bank took advantage of you, or you were being harassed or charged inappropriate fees. Now you do.

WARREN: The Bureau is also there to help you make better-informed decisions. Before you take out a mortgage, or a loan for college or a new car, check out the agency’s website – CFPB.gov. It can help you sift through the confusing but important details.

POTUS: Republicans and big banks who opposed these commonsense rules claimed they’d hurt the economy. But we’ve seen what happened to the economy when we didn’t have these rules. And despite their claims, our economy is stronger today than it was before the crisis. Since we dug out from the worst of it, our businesses have added almost 15 million new jobs. Corporate profits are up, lending to businesses is up, and the stock market has hit an all-time high. So the idea this was bad for business just doesn’t hold water. Now our task should be making sure we build on those gains, and make sure they’re felt by everybody.

WARREN: But every year, like clockwork, big banks and their Republican allies in Congress try to roll back these protections and undermine the consumer watchdog, whose only job is to look out for you. Their nominee for President promises to dismantle all of it. They may have forgotten about the crisis, but working families sure haven’t. We haven’t either. And that’s why we’re not going to let them give Wall Street the ability to threaten our economy all over again.

POTUS: Whether you’re a Democrat, a Republican, or an independent, if you’re a hardworking American who plays by the rules, you should expect Wall Street to play by the rules, too. That’s what we’re fighting for.

WARREN: It’s about basic fairness for everyone.

POTUS: And it’s about responsibility from everyone. Thanks to leaders like Senator Warren, our country, our economy, and our families are better off. Let’s keep it that way. Thanks for being here, Senator Warren.

WARREN: Thanks for having me, Mr. President.

POTUS: Have a great weekend, everybody.