PARIS, FRANCE — It’s the most romantic city in the world. Paris – the city of light, and love. If you’re thinking of slipping away for a long weekend, think about slipping into the luxury of the Hotel Sezz. This small boutique hotel is located on a side street just off the Seine, on the Right Bank. It’s a quick walk over one of Paris’ fabulous bridges to the Champs de Mars and the Eiffel Tower. It’s close to the Trocadero, and some wonderful small museums, the Musee Baccarat and Musee de Vin, which used to be the wine cellar for the Eiffel Tower. 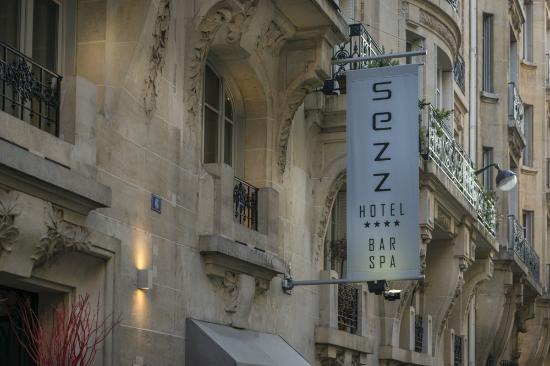 The hotel was the setting for scenes from the Brad Pitt – Angelina Jolie movie “Mr. and Mrs. Smith,” and you can just see them sitting here, sipping Veuve Clicquot champagne, the hotel’s signature drink.
In fact, Veuve’s orange label is carried out in the theme of this ultra-modern hotel, punctuating the stark grey-ongrey modern interior. Magnums decorate the intimate restaurant, and every guest is greeted with a flute of champagne upon arrival. The personal service continues as you are led to your room by your own “assistant.” 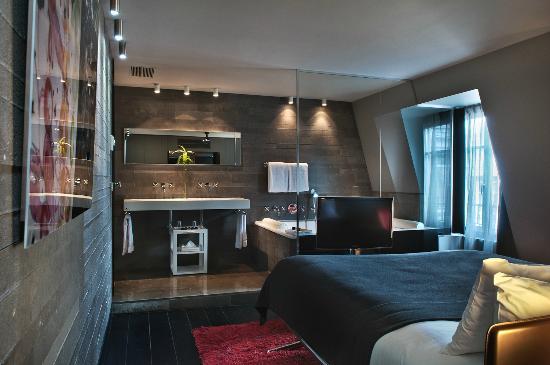 Our room was large and lovely, with the same slate grey tones that gave it a spa like feel. The combination of contemporary design and modern technology continued here, with sleek lines and all the modern technological conveniences. Plus we had a beautiful small balcony to look out over a charming streetscape of old Paris buildings – the best of the old and the new.
I love French tubs! Our very modern bath had a deep tub and Acqua di Parma amenities, huge towels and comfy slippers. It was hard to leave! We had breakfast downstairs in the hotel, but for dinner our assistant guided us to a new to us – and absolutely fabulous – restaurant right around the corner.

Le Tournesal offered the best steak I’ve had in France, with a divine shallot sauce, and of course, les frites. The killer was the chocolate mousse, which came the traditional way in a big bowl – enough for two, and I must confess, enough that we had it for breakfast the next morning.
We strolled the city, and lingered for hours at Les Deux Magots sipping impossibly small cups of coffee and nibbling on foie gras. We shopped the Bon Marche Food Hall and bought gifts to bring home. And of course a trip to Paris wouldn’t be complete without a pilgrimage to my favorite Porte de Vanves Flea market, where you can buy the detritus of Paris history. I didn’t buy any china but found funny old postcards and prints – easier to pack!

There were also long walks along the Seine where we watched the Eiffel Tower twinkle on the hour, and we did the Bateaux Mouches boat ride to see Paris lit up at night. I was thrilled to be invited to dinner at a Parisian couple’s home, where we started with champagne and ended with cheese and chocolate. Very French.
Can you do just three days in Paris? Yes, we did, and managed to hit a museum or two, meandered down the Champs Elysee where we bought cosmetics from a fabulous man at Guerlain, and then tried our new looks out while having drinks at the Crillon Hotel. My husband used to point out that the Crillon is where Hitler based his headquarters in Paris, would point to the bullet holes in the facade. I just know it as a beautiful dining room and one of the best gifts shops in Europe!
We hit my favorite Rue Cler market street for cheese and wine, and took it up to Montmartre for the festive evening gathering that takes place nightly on the steps of Sacre Coeur. We listened to the street musicians, were amused at the hawkers selling their wares, and thrilled when two young Parisians hit on us. 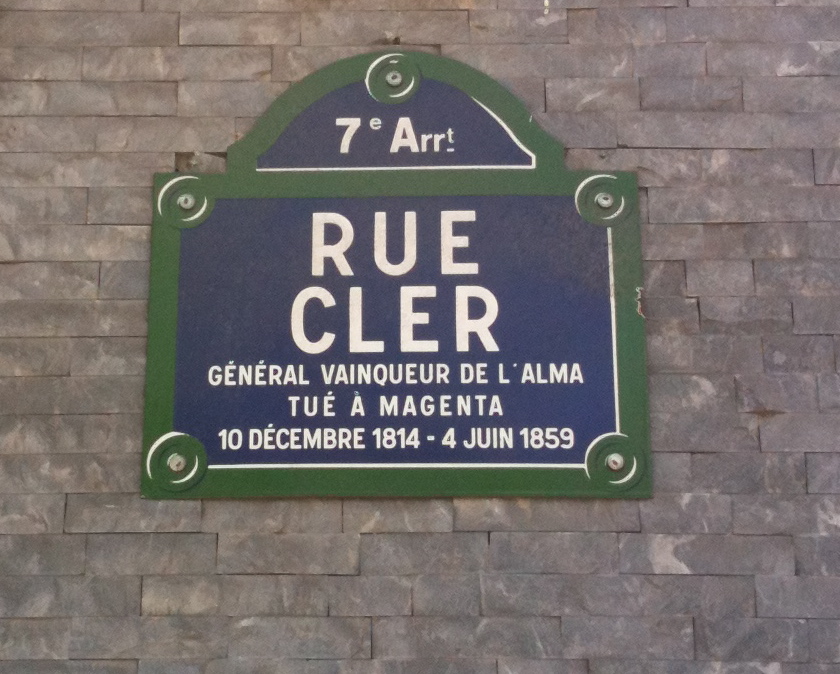 I’ve done most of the touristy stuff before, so we didn’t have to rush from monument to monument. Paris is to be savored, and we did just that, with long, late dinners and leisurely lunches sipping wine and people watching.
Paris is a moveable feast – and we kept moving so we could keep feasting, walking from one end to the other. We returned each night to Hotel Sezz, which made a great base for us, with a Metro stop close by and the bridge
over the Seine beckoning us to the Left Bank every morning. The staff were immensely gracious and helpful guiding us to new cafes and experiences. I return time and time again to the city, and will return again to Sezz.
For booking visit www.hotelsezz-paris.com. Hotel Sezz, 6 Avenue Fremiet, 75016 Paris, France+33 1 56 75 26 26.