MUMBAI, INDIA — Originally called Bombay, Mumbai is India’s most vibrant city located on the west coast of the country facing the Arabian Sea. The financial capital of India it is also the country’s busiest port, a thriving center for film production (Bollywood) and a dynamic and cosmopolitan city whirling with color and activity.

The city is one of striking contrasts and extremes with historic buildings dating from the days of the British Raj juxtaposed with glittering skyscrapers, traditional markets and bazaars competing with new shopping malls, and the wealthy housed in large mansions next door to sprawling slums home to the millions who have poured into the city from the surrounding countryside.

The city is located on a long promontory and the traditional parts of the city are divided into a number of distinct area. The historic Fort area contains a number of old fortifications and is home to some of the city’s top hotels and restaurants. There are many fine Victorian buildings especially along Mahatma.Gandhi (MG) Road and the edge of Oval Maidan, an extensive open space.

Mahatma Gandhi is still a universally revered figure in India and his name adorns many roads and other places. Mani Bharan, the home where he stayed when he visited Mumbai, has been converted into a museum and a research centre with a library.

The ‘centrepiece’ of the city is the imposing Gateway of India commenced in 1911 to commemorate the visit of King George V, but not completed until 1924. Jetties close to the Gateway which is on the harbour’s edge take visitors to Elephanta Caves on an island about six miles away; the World Heritage listed caves contain wonderful carvings (from around the 5th to 8th centuries AD) of the life of Shiva and are well worth a visit. The sea face in front of the Gateway is Mumbai’s favourite promenade and is always packed with people and hustling vendors.

Opposite the Gateway is the majestic Taj Mahal Hotel, Mumbai’s most famous and luxurious hotel while the Prince of Wales Museum and National Gallery of Modern Art are also close by. The Taj Mahal invokes all the glory of a bygone era – indulge in the famous afternoon tea.

A must see for visitors is the main rail terminus Chhatrapati Shivali Terminus commonly referred to as Victoria Terminus. From the outside this splendid Gothic structure looks nothing like a railway station but inside a seething mass of people dash hither and thither as they are disgorged from the trains. Over half a million people use the station daily. The façade of the building, completed in 1888, displays wonderful ornamentation and embellishment. Inside exquisitely executed panels and friezes on walls, windows and arches and the majestic dome complement the exterior

North of the station Crawford Market sells all kinds of fresh produce although the main action is early in the day. Bas-reliefs by Rudyard Kipling’s father adorn the Norman-Gothic exterior.

Marine Parade sweeps along Back Bay with Chowpatty Beach at one end; in the evening Chowpatty Beach takes on a carnival atmosphere with rides for children, families strolling, astrologers and numerous food stalls for a tasty snack. Marine Parade is a great spot to watch the sunsets over the Arabian Sea.

There are numerous churches of all denominations in Mumbai and one of the most spectacular is the Haji Ali Mosque situated at the end of a long causeway reaching into the Arabian Sea. The mosque shimmers like a mirage in the boiling sun and appears to float on the water; it can only be approached at low tide. Crowds of faithful buy offerings and flowers.

There are two famous ‘traditions’ in Mumbai not to be missed. . Under the burning rays of the sun the famous dhobi wallahs operate their open-air laundry close by the railway station in Mamalakshmi. Standing in hot water these industrious workers beat and clean thousands of sheets, shirts and other items before hanging them out to dry.

In other parts of the city the incredible dabbawallahs bring the thousands of tiffin boxes containing cooked lunches (usually rotis, vegetables and dal) lovingly prepared in outlying homes via the train network to be delivered to offices across the city. Watch them sorting the tins at stations like West End and Church Gate and then being carried head high through the milling populace – and they never make a mistake. 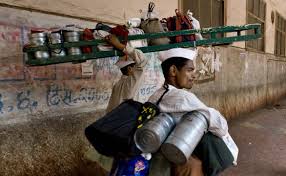 Visiting Mumbai —  As befits a major financial and trading hub Mumbai is well served by hotels of all standards and at the top end of the range there are some superb properties. The two major locations for the top hotels in the Colaba area close to the Gateway of India and also near to Mumbai’s Chhatrapati Shivaji International Airport about 20 miles from the city centre..

The most historic and iconic hotel in Mumbai is the Taj Mahal Palace (www.tajhotels.com) opposite the Gateway of India which has been welcoming maharajas, dignitaries, personalities and other guests since opening in 1903. It unfortunately drew world attention when it was bombed in 2008 but has since recovered. Other well-known hotels in the this area include the Oberoi Mumbai (www.oberoihotels.com), and Intercontinental Marine Drive (www.intercontinental.com

Out near the airport many recognisable chains such as Hyatt Regency, Hilton Le Meridien have superb properties. I stayed at The Leela Mumbai (www.theleela.com/mumbai) which I would highly recommend.

The choices for dining are staggering. All the top hotels offer a variety of choices including the most stunning buffets where you can sample the full range of Indian cuisines plus international dishes. For example the Citrus restaurant at The Leela has breakfast, lunch and dinner buffets and I could hardly scrape the surface of the choices. The Jamavar restaurant there has superb northern and southern Indian cuisine.

Throughout the city you can find superb dining – just ask your concierge for a local recommendation. Prices are inexpensive and it pays to be a bit adventurous.  The best time to visit Mumbai is from November to March.. For more information check the Indian tourism site www.incredibleindia.org.   Many international carriers have flights to Mumbai.