The Plaza Hotel & Casino Announces 2017 Show Dates For The Scintas

LAS VEGAS, NV — After an extremely successful 2016 run, the Plaza Hotel & Casino is extending the performance schedule for the legendary and critically acclaimed music and comedy show, the Scintas, through April 2017. The talented foursome will also perform a special New Year’s Eve show on Saturday, Dec. 31. 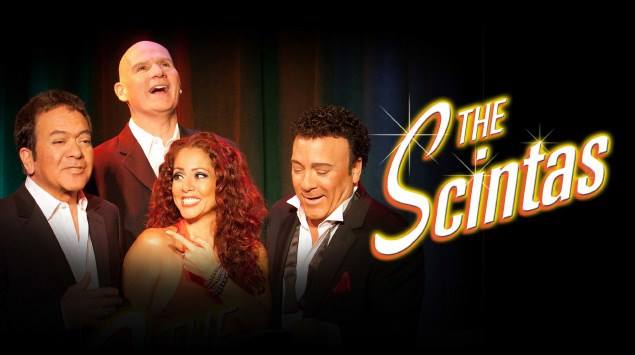 To celebrate the New Year, the Scintas will kick off with a special performance at 8 p.m. on New Year’s Eve that will include their renowned music and comedy routines with a unique holiday flare that will make the show one not to miss.

“So many shows come and go in Las Vegas,” said Jonathan Jossel, CEO of the Plaza Hotel & Casino. “We are proud to have the Scintas call the Plaza home. Our guests love the Scintas’ brilliant mix of music and comedy. Their show has become a hallmark of the Plaza and makes for an unforgettable night downtown – dinner at Oscar’s steakhouse followed by a classic Las Vegas show experience with the Scintas.”

“We are happy to start the New Year off at the place we call home, the legendary Plaza Hotel,” added Frankie Scinta. The Scintas, brothers Frankie and Joe and “honorary Scintas” Peter O’Donnell and Janien Valentine bring refreshing wit and endless talent to the highly regarded show. Having performed for hundreds of thousands of people, the Scintas have become a fixture in Las Vegas for nearly two decades with their signature comedy, musical prowess, and knack for spot-on impressions. The show spans several generations, blending music of all styles with relatable humor that leaves the audience feeling like they’re hanging out with family.

Ticket prices for the New Year’s Eve show and all shows in 2017 start at $29 for general admission. VIP tickets offering guests preferred seating and an autographed photo are $49. A special “dinner and a show” package also is available for $99 per ticket and includes a three-course prix fix dinner at Oscar’s steakhouse in addition to a VIP show ticket. Prices do not include taxes and fees. Tickets are available online at www.plazahotelcasino.com or by calling 702-386-2507.

About the Plaza Hotel & Casino — Located in the heart of downtown Las Vegas, the Plaza Hotel & Casino combines a vintage Rat Pack attitude with modern styling for the ultimate Vegas experience. First opened in 1971 and built on the site of the original Las Vegas railroad depot, the Plaza boasts 1,003 rooms and suites renovated with custom-designed Mark David furnishings, a 500-seat classic Vegas showroom with nationally recognized entertainment, and a variety of dining venues led by the modern meets Rat Pack styled Oscar’s steakhouse in the iconic glass dome overlooking the Fremont Street Experience. The Plaza has more than 500 slot machines and nearly two dozen table games on its 80,000 square foot casino floor, downtown’s largest race and sports book with 75 flat screen televisions, downtown’s only bingo hall, and 30,000 square feet of ballroom and meeting space. www.plazahotelcasino.com