Stroll Through Quebec City And Taste Europe In Canada

QUEBEC CITY, CANADA — Perched high on the edge of the escarpment overlooking the St Lawrence River in Quebec City, the historic Fairmont Le Chateau Frontenac hotel must be one of the best known and most recognizable icons in Canada if not North America. 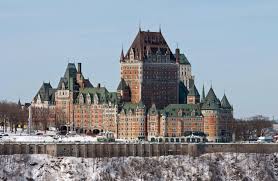 Opened in 1893 it was one of the castle-like hotels built by the Canadian Pacific Railway Company (others include the wonderful Banff Springs Hotel) to draw wealthy tourists as the railway line expanded across Canada. Its position is spectacular affording views along the river and over the city.  In fact like the hotel the old Upper Town part of the city of Quebec is dramatically positioned on the upper level above the river incorporating the Plains of Abraham, the Citadelle and a maze of narrow streets full of charm and character. 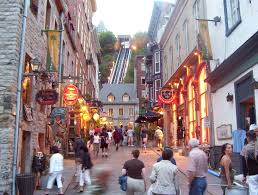 Although relatively small in size the old town (since 1985 a UNESCO World Heritage site) is crammed with sights, many historic dating back to the 17th and especially the 18th century where in 1759 General Wolfe defeated General Montcalm on the Plains of Abraham leading to the Treaty of Paris which gave Canada to Britain. The French might have lost the battle but Quebec City and the whole region of Quebec is truly French in character and in language.

The Plains of Abraham (Battlefields Park) are now a lovely urban park with walking and cycling trails (skiing in winter), monuments and historic artillery and woodlands and gardens perfect for a picnic. Especially attractive is the Joan of Arc Garden including an equestrian statue of the French heroine.

The old town is surrounded by over 4.5km of fortifications and the eastern flank is the Citadelle, its star-shaped layout characteristic of Vauban fortifications. Many military ceremonies are held here during the summer months. From the walls of the fortifications you get terrific views of the old city, Chateau Frontenac and also the majestic Hotel du Parliament. Guided tours (free) are available of the Parliament building which showcases the superb interior décor including the National Assembly Chamber with its collection of works of art. Try La Parliamentaire restaurant with its Beaux-Arts period décor and great food.

The tree-lined Grande Allee runs between the open spaces of the Plains of Abraham and the Parliament buildings through the imposing Porte Saint Louis to the Rue Saint Louis which ends near the Chateau Frontenac and the Terrace Dufferin which offers views of the river and from which an old funicular railway leads down to the lower level of the city alongside the river (a steep winding stairway is also available).

Panoramic 360 degree views of the city and river are best obtained at the Observatoire de la Capitale a viewing platform 221m up on the 31st floor of the Edifice Marie-Guyart located behind the Parliament building.

The Rue Saint Louis and the parallel Rue Sainte Anne and Rue Saint Jean are lined with interesting boutiques, small hotels, a real eclectic mix of shops, artisan’s workshops, restaurants and cafes as well as churches and museums. The old town is best explored on foot as every twist and turn brings you to new delights. However other options include tours in a caleche, a horse drawn open carriage which is popular with visitors.

Don’t miss the Musee du Fort near the tourist office on the Place d’Armes which has a 30 minute sound and light show covering the six military sieges that shaped the city’s history.   There are many other museums dotted throughout the city ranging from art galleries (Musee des beaux-arts du Quebec , to the Musee de la Civilisation.   Although in predominantly a French speaking Catholic region, Quebec City has churches of many denominations. Notre Dame de Quebec Basilica-Cathedral besides being the main Catholic church is renowned for its architectural values. Cathedral Holy Trinity is the largest Anglican church and the St Andrew’s Presbyterian church reflects the fact that the first Presbyterians in Quebec were Scottish troops in General Wolfe’s army.

I am a fan of the detective (Chief Inspector Gamache) books of Canadian author Louise Penny mainly set in the lovely Eastern Townships area between Montreal and Quebec near the US border. One of her books ‘Bury Your Dead’ is set in the English Library of the Literary and Historical Society in a short side street Chaussee des Ecossais between Rue Dauphine and Rue Sainte Anne in the old town of Quebec and like many ‘groupies’ I was thrilled to visit the library, very olde worlde, and crammed with English language books, rare for this French speaking city. The library is in the Morrin Centre, the building being the first prison in Quebec City.

Just outside the city walls at 699 Rue Saint Jean is Epicerie JA Moisan, the oldest grocery store in North America. Opened in 1871 it is like walking into an old style grocer’s shop but it contains a superb selection of gourmet and general foods, many being products of Quebec region. On the opposite side of the street at no. 634 is a chocolate museum called Eric.

The other part of the Old Town is the lower part alongside the river where the cruise ships tie up. From the waterfront you get a terrific perspective of the dominant Chateau Frontenac while the narrow streets of the area called Quartier de Petit-Champlain are lined with interesting and different boutiques many selling only items produced in Canada. My wife discovered many unique items especially clothing and her credit card took a bit of a battering.

There is a large range of accommodation for all budgets both inside the old town and nearby. Not everyone will be able to splurge on the Fairmont Le Chateau Fontenac but other excellent hotels include Le Champlain Vieux, Auberge Place d’Armes, Sofitel and Hilton and I could recommend the centrally located Delta Hotel near Parliament.

Although most people visit Quebec City in the summer there are many festivities during the very cold winter months particularly the Winter Festival in January and February with parades, ice sculptures, dances and music and a huge ice slide. There is even a ‘perishable’ ice hotel constructed but it is located outside the city..

Restaurants are everywhere with a very good selection along the Grande Allee near Parliament.  For more information on Quebec City check the website www.regiondequebec.com