Ancient traditions that honor the sports culture and history of the Hawaiian people continue to be practiced today. They play an important role in preserving customs passed down from generation to generation. Opportunities for travelers to take part in ancient Hawaiian sports are more accessible than one might think on each of the islands and give visitors the chance to really engage in something unique to the destination. Here are a few to consider on that next Hawaii vacation:

Outrigger Canoe Paddling — Built for stability and speed, the Hawaiian outrigger canoe was adapted to withstand the difficulties associated with sailing and fishing on the Pacific Ocean. Still widely practiced today, outrigger canoe paddling has become a popular competitive sport that pays homage to ancient tradition. Visitors have a chance to take part in the fun also, as the sport is offered recreationally on several of the Islands at many hotels/resorts and along most popular beaches. Surfing — Hawaii is the birth place of surfing. What began as the sport of ancient Hawaiian chiefs and nobles has now become the wildly popular and recreational sport of surfing. After surviving near extinction, it has taken root in today’s culture on both competitive and leisurely levels. Although the boards and techniques have evolved over time, surfing continues to embody the Aloha spirit by locals and visitors alike. 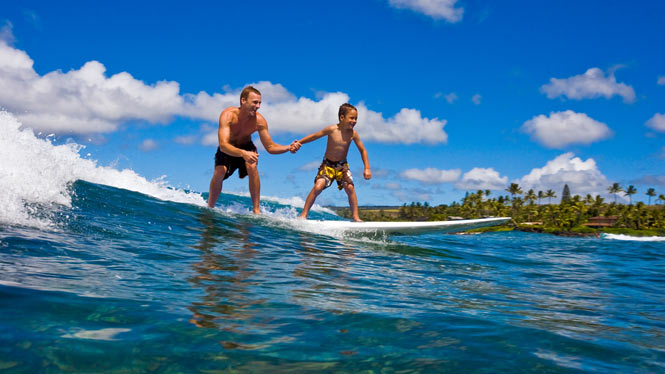 Holua Sledding — Just as the ancient Hawaiians developed a sport to surf the sea, they also created one to surf the land on a thin four-inch wooden sled. Surfing mountain slopes and lava flows, holua sledding is a tradition that has been passed down throughout time to honor the Hawaiian volcano goddess. Although this sport is often left to the experienced, it is an important part of understanding Hawaiian culture and tradition. If you have a chance to witness this while visiting, you won’t want to miss the opportunity.

Ulu Maika — This traditional sport was utilized to practice both accuracy and strength. Ancient Hawaiians would attempt to toss several heavy stones between two posts placed in the ground about a foot apart. Historically, this bowling-esque’ native sport was used to train and prepare Hawaiian warriors for battle. Today, it has a more recreational use and can be played wherever supplies and space allow for it. If you happen to be at a luau or a cultural site for visitors, it will likely be found there.