Dresden Is Considered The Florence Of Germany

DRESDEN, GERMANY — Late in the afternoon the rain clouds built up over the city of Dresden and the members of the large numbers of tour groups dashed for cover as the storm broke and the skies darkened.

Dresden has had many dark days especially in February 1945 when the city was devastated Allied bombing. However during its subsequent period as part of East Germany and from 1990 as part of reunified Germany it has been substantially rebuilt, in many cases using the same plans and materials; in many cases it is virtually impossible to tell what is old and what is new. Even more modern buildings have been constructed with great sympathy for the style of the ‘old’ buildings

Nowadays Dresden is a thriving, modern and very exciting city, picturesquely situated astride the River Elbe and a popular tourist destination for visitors from around the world. With its collection of Baroque buildings and river location it is often referred to as the ‘German Florence’. 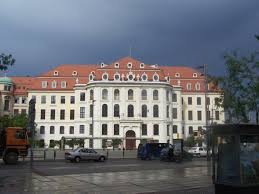 The historic Old Town (Aldstadt) is compact and best explored on foot. Dresden is in Saxony which is predominantly Protestant and the Frauenkirche (Church of our Lady) is wonderfully ornate inside and out; from the balcony of the cupola you get great views over the Old Town and river.

In addition to the Frauenkirche there is also the imposing Catholic Cathedral (Hofkirche) while close to both is the amazing Furstenzug, a 101m long mural made up of over 24,000 Meissen porcelain tiles and depicting the rulers of Saxony from 1123 to 1904. When Dresden was firebombed the sandstone holding the mural collapsed and burnt as the temperature reached 1000 degrees Celsius but the porcelain tiles were unscathed as they require a temperature of 1200 degrees in production.

Interestingly the ‘recipe’ for the famous Meissen porcelain was developed in Dresden but concerns about industrial espionage even back in 1708 led to the secret of production being transferred to Meissen for safety.

Meissen is only an hour’s journey from Dresden and it worth a visit; you need deep pockets to buy any items. One interesting fact about Meissen porcelain is that if you have a piece and it is broken it can be replaced exactly even if the design is very old.

Dresden has always been a center of the arts and culture and after the war museums and galleries were among the first buildings rebuilt. The famous Dresden Opera House known as the Semperoper after its designer Gottfried Semper is famous throughout the world and holds many opera performances during the year; in the summer recess you can do a tour to admire the fantastic interior. 2013 celebrates the 200th anniversary of the birth of Richard Wagner and the Semperoper will host many performances of his works.

Adjacent to the Semperoper is the Zwinger, a group of buildings around a central open space which houses a superb collection of Old Masters and the Porcelain Collection

The Royal Palace was for several centuries the residence and seat of government for the House of Wettin. Nowadays it includes several museums including one of the royal treasure chamber and another of a collection of Turkish artifacts including huge tents and numerous swords. The panoramic views of the city from the top of the tower are worth the climb – only 220 steps.

There are other excellent museums including the Albertinum and Johanneum, the latter once the royal stables. The National Military History Museum with over 9000 exhibits opened in Dresden in October 2012.

The River Elbe plays a key role in the life of Dresden and there is a range of tours along the river, some by old paddle steamers. Dinner cruises are popular in the long summer evenings A couple of old bridges still cross the river to the Neustadt; a mixture of shopping areas, residential and a couple of streets of bars and cafes where the younger residents gather to party.

Old fortifications still line part of the river and from the top, a popular promenade, you get views of the river and the key city buildings. There are many cafes and restaurants around the Old Town area even stands selling bratwurst and currywurst if you just want a quick snack.

Not far from the city centre the river passes three old palaces, Schloss Albrechtsberg, Lingnerschloss and Schloss Eckberg (now a luxury hotel) high above the river. However more interesting is Pillnitz Palace further along the river which has superb gardens and the palace interior can be visited.

I would recommend taking one of the hop on, hop off tours either of the city and suburban area or out to Pillnitz as the itinerary gives an excellent overview of the recent developments in Dresden including old villas in suburban areas and dilapidated factories now turned into residences. The city tour passes Yenidze, a factory built in the style of a Turkish mosque which used to be the centre of cigarette production in East Germany.

There is plenty of choice of accommodation including Hilton and Radisson. On the edge of the Old Town and overlooking the Elbe I would recommend the 12 storey Hotel am Terrassenufer. Ask for a room on a higher floor facing the Old Town and you will have the most glorious views of the city and activities on the Elbe. Check the website www.hotel-terrassenufer.de

Getting round Germany, especially if concentrating on the main cities, is easy using a Rail Europe Pass. Tickets can be purchased on the internet or contact your preferred travel agent.