Contemporaries practicing sustainable traditions of old: Ready and willing to share their stories

He alii ka aina, he kauwa ke kanaka: The land is a chief; man is its servant.
Mary Kawena Pukui

Native Hawaiians understood the relationship between humans and the natural world as a reciprocal one. Simple in concept and powerful in action, the notion is that if people malama (care for) their land, the land will in turn provide them an abundance of life. This concept, which in Hawaiian antiquity was a guiding principle in the lives of all people, instilled in them an integral sense of kuleana (responsibility) to protect, preserve and perpetuate oceans, land and all living beings therein.

As our global community works together to implement sustainable measures, the modern-day model of the reciprocal relationship between humans and nature is found in the minds, and practices and examples set by cultural practitioners in Hawaii who live by the sustainable doctrines of their ancestors.

Check out how the following contemporary practitioners are holding fast to the values of he alii ka aina, he kauwa ke kanaka in this modern world. Watch the subsequent mini-films for an in-depth, intimate window into their realm, and discover how you can join them on their journey. 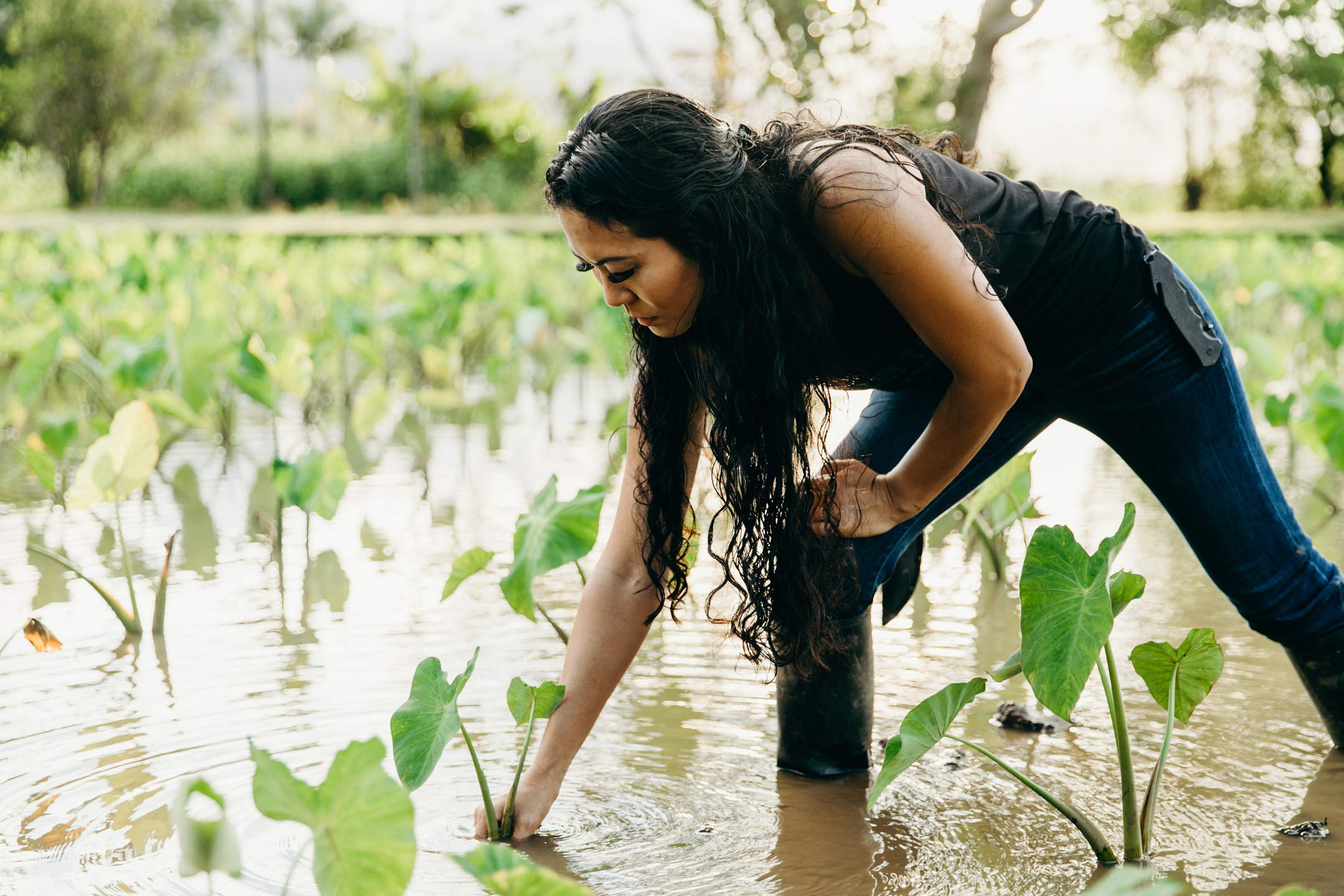 There’s rarely a break and never a day off in the life of a kalo (taro) farmer, especially one as entrepreneurially driven as Lyndsey Haraguchi-Nakayama. She wouldn’t have it any other way. For Lyndsey, each day is an opportunity to contribute to the legacy passed down to her from her great-great-grandparents who worked the very same fields she does in Hanalei on Kauai’s North Shore. Whether harvesting kalo in preparation for her farm’s ecotour, or delivering a load of kalo burgers, kalo hummus or kulolo (a kalo dessert) to her lunch wagon just down the road in Hanalei, Lyndsey works each day to perpetuate traditional farming practices and to breathe life into the land that has sustained her family for generations. She understands intimately that the act of malama aina (caring for the land) carries an ancestral understanding of responsibility to the natural world. 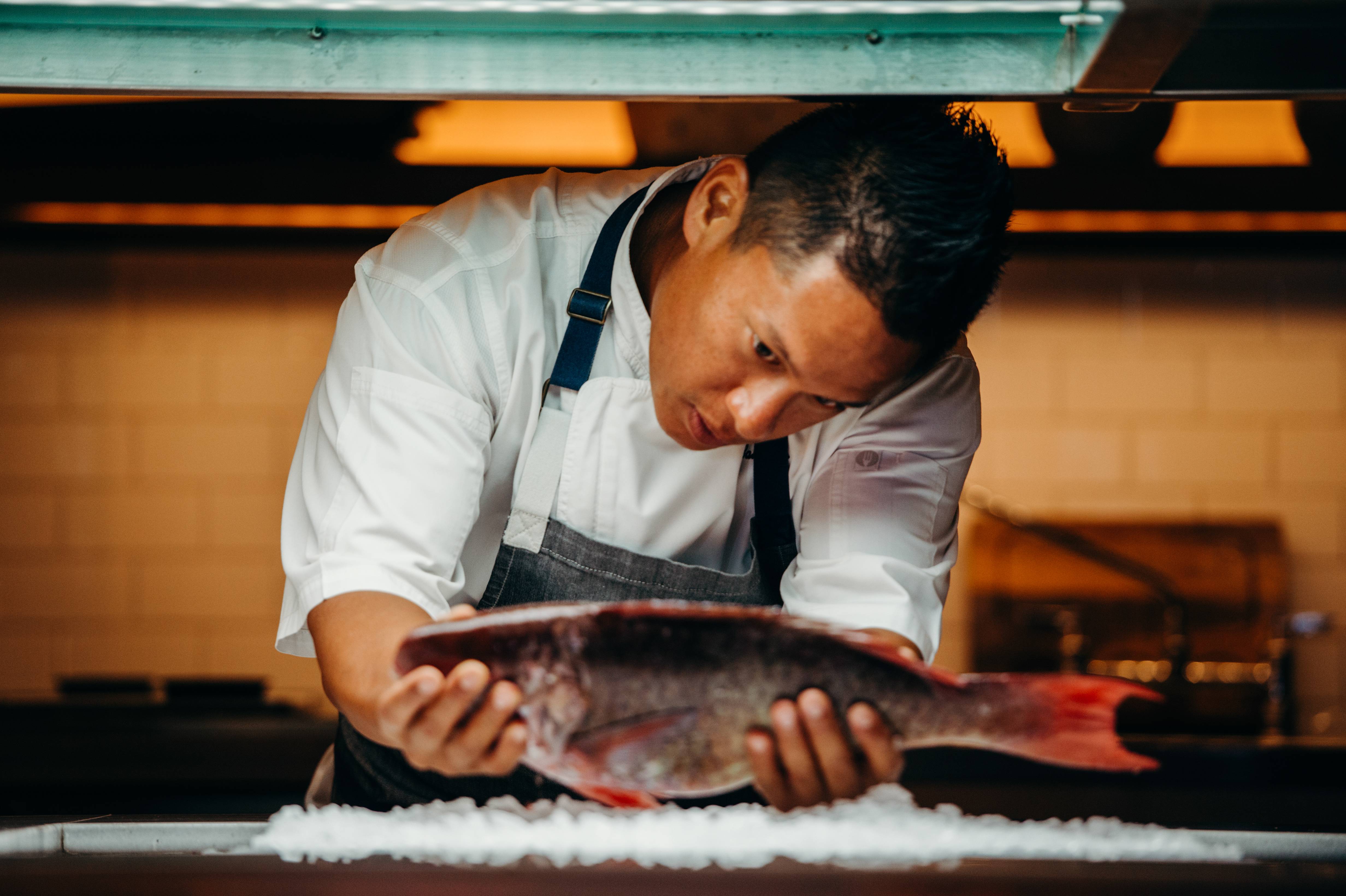 Food is a universal mode of connectivity. It’s a frequent reason for the coming together of people for the shared experience of nourishing the body, mind and soul. Maui native Isaac Bancaco, executive chef at the Andaz Maui at Wailea Resort, keeps all of this in mind in his cooking, blending the Filipino-Hawaiian cuisine of his childhood, his eco-conscious knowledge as a lifelong fisherman, and the culinary expertise gained in his professional studies to infuse each of his artfully prepared dishes with the flavors and spirit of Hawaii. Taught from a young age the importance of conserving ocean, plant, and land resources, Isaac learned to take only what was needed from nature and never leave anything wasted. He brings that same perspective to every dish he serves at Andaz Maui, adapting his menus to reflect ingredients local fishermen and farmers are harvesting at any given time of the year.

To learn more:
•    Taste culinary sustainability at Kaana Kitchen at the Andaz Maui at Wailea Resort
•    Check out this video: Hawaii Rooted: From Spear to Fork 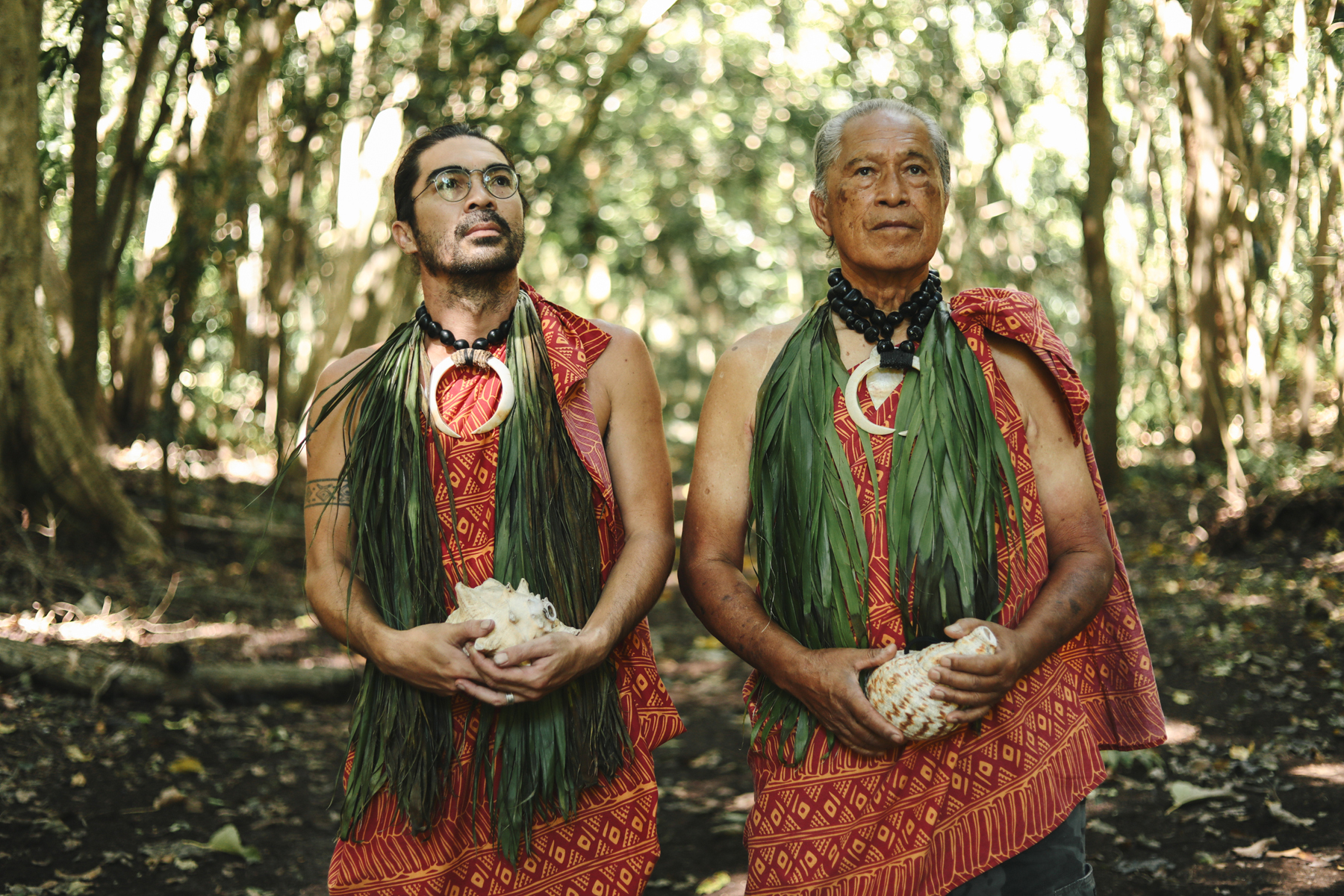 Halawa, its name deriving from the Hawaiian word meaning “sufficient breath” or “sufficient life,” is a protected, verdant valley tucked away on Molokai’s remote east side. The valley is home to father-son team Pilipo and Greg Solatorio, descendants of the first settlers of Molokai and Halawa Valley. His knowledge shaped by his father, Greg lives sustainably off of resources provided him throughout the Halawa Valley watershed, just as his ancestors did for hundreds of years. Whether tending to his kalo fields and fruit orchards in Halawa, or fishing from the valley’s ocean-facing shore, Greg lives his kuleana as a steward of his family land. The owner and operator of Halawa Valley Falls Cultural Hike, he also shepherds visitors through his ancestral lands safely, sharing the history of Halawa Valley, the people who once resided there, and the culture of Molokai. Pioneering a successful model of sustainable tourism, Greg and his father are able to share a truly authentic experience with visitors while managing human footprints on their aina of Halawa. According to Anakala (Uncle) Pilipo, culture is not secret, it is sacred. He believes when both the practicing and sharing of culture stops, ike kupuna (ancestral knowledge) begins to fade from living memory until it is lost forever.

To learn more:
•    Experience the Halawa Valley Falls Cultural Hike and be guided into the Molokai of old
•    Check out this video: Hawaii Rooted: Living a Cultural Legacy 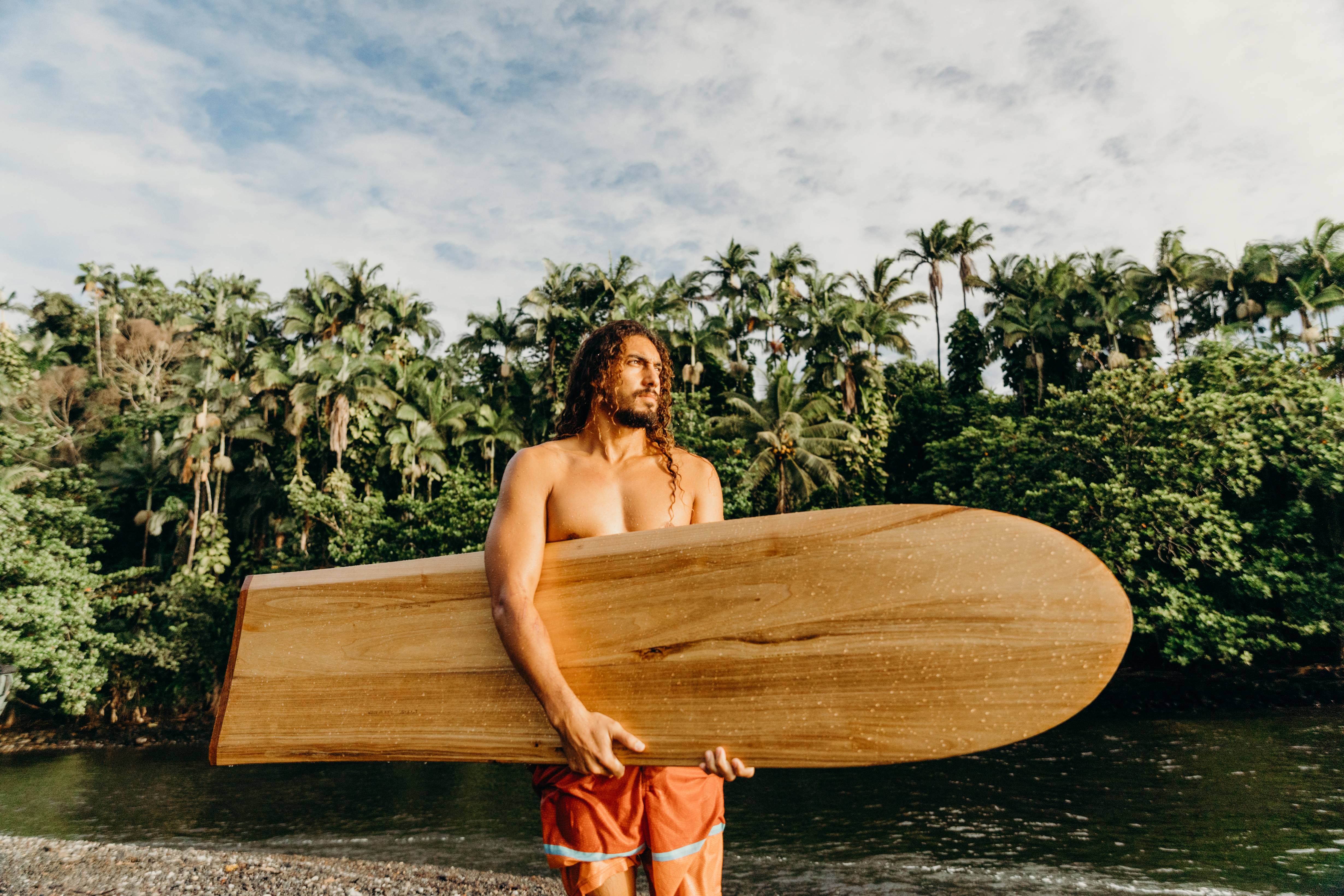 When not out on the ocean surfing waves, Cliff Kapono applies his western education as a chemist to examine the relationship between people and nature. His work has led him to linking human interconnectedness with the natural environment down to a molecular level, proving that humans not only have an impact on nature, but that nature leaves its mark on humans. Through his research, Cliff has been able to scientifically articulate a relationship his Hawaiian ancestors long understood: the undeniable interdependence between people and the elements they exist with. In identifying the similarities between the DNA of humans and that of the natural world, Cliff hopes to show people how all living things are connected.

To learn more:
•    Check out this video: Hawaii Rooted: People of the Sea 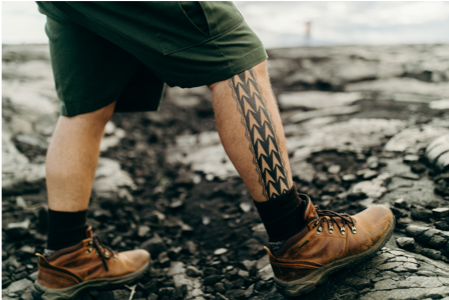 As it has been for many millennia, the island of Hawaii remains undeniably alive. Every so often, Pele, the Hawaiian creator deity associated with all the volcanoes of the Hawaiian Islands, rises from the depths of the island of Hawaii’s Kilauea and Maunaloa volcanoes to create new land. Keoni Kaholoaa, a Hawaii Volcanoes National Park interpretive ranger and descendant of Pele’s family, has experienced her ascendance to the surface of the Earth in the form of molten lava several times over the course of his career. As a park ranger, Keoni shares with visitors the tales of Pele, on whose land they walk. He explains that although the park’s vast expanses of lava frozen mid-flow into long smooth ropes called pahoehoe and sharp, jagged sections called aa may appear barren, there is life everywhere. New land provides an opportunity for the native Hawaiian flora, fauna and ecosystem to rebuild, regrow and flourish. Keoni’s kupuna (ancestors), knew that this was part of Hawaii’s life cycle. And now visitors who meet Keoni know it remains so.

Enjoyed viewing the mini-films linked here? Watch the complete Hawaii Rooted series of 17 films, each spotlighting an individual Hawaii resident aiming to assure traditional elements of local Hawaii and Native Hawaiian culture and customs remain vital, vibrant and perpetuated long into the future. Individually, these people are kumu, artisans, historians, chefs, surfers, navigators, ranchers, hula dancers and performers – a few, could even claim several of these titles. Together, they are practitioners of culture, with one foot deeply rooted in tradition and the other in the modern world. Watch their stories at www.hawaiirooted.com.