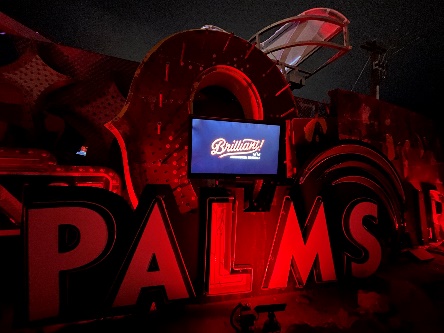 LAS VEGAS –  The Neon Museum celebrated the 10th anniversary of the opening of its current campus on Las Vegas Boulevard in downtown Las Vegas on Oct. 28, at Jungle Palace, the private estate of former Las Vegas illusionists Siegfried & Roy. During the special event, four exciting announcements were made about the future of the museum’s collection.

Lido de Paris sign –Todd VonBastiaans has provided the necessary funding to restore and reilluminate this iconic sign as an homage to the stage performers and crew that make Las Vegas’ legendary shows possible. The Lido was one of the first topless shows on the Strip and instrumental in creating the classic image of the glamorous Las Vegas showgirl. The show was brought to the Stardust Hotel from Paris in 1958 and closed in 1991. The sign, which is currently in the Neon Boneyard, will be refurbished, relit, and relocated closer to the Stardust sign, enabling tours to better its story and the history of entertainment in Las Vegas. The sign will be restored over the coming months and relit in February 2023.

Palms sign – The San Manuel Gaming and Hospitality Authority and Palms Casino Resort has generously provided a grant to refurbish and reilluminate its sign currently in the Museum’s holdings. When complete, the sign will be installed in the Neon Boneyard enabling the museum to tell the history of Tribal gaming on these lands. The Palms Casino Resort is the first resort to be fully owned and operated by a Native American Tribe in Las Vegas. In conjunction with this sign project, The Neon Museum will create and install an educational panel outlining the history of Native Americans in Las Vegas prior to the city’s founding in 1905 and tribal life today.

YESCO Conservation Fund – YESCO, the official founding partner of The Neon Museum, has provided a substantial fund to provide for the conservation, repair and improvement of signs in the Neon Boneyard. This fund can be used independently or as a match with donor dollars to allow for even more restoration initiatives. When The Neon Museum was first established, approximately one-third of the Museum’s collection, more than 180 signs, were loaned to the Museum by YESCO and remain in the collection today.

Barbara Molasky Acquisition Fund – Seeded by the Molasky family and named after the museum’s founding president, Barbara Molasky, who received the museum’s 2022 Glow Award for her leadership and contributions to the establishment of the museum, this project Fund will allow The Neon Museum to compete with collectors and purchase signage and ephemera from closing properties. In addition, it will allow for the purchase of works that will enhance the museum’s growing fine art collection.

“The Neon Museum is humbled by the generosity of so many,” said Aaron Berger, executive director of The Neon Museum. “Each of these significant contributions allow the Museum to expand in new directions from sharing the stories of Native peoples to those of the multitudes of crew members working behind the curtain to expanding our collections and repairing and restoring more of our city’s history.”