UNITED KINGDOM, EUROPE — Combine a shopping trip and a spot of sightseeing with a visit to one of Britain’s historic shopping quarters. The country may have a cutting-edge fashion scene, and a number of state-of-the-art shopping centres, but if you’re looking to pick up something a little different, step back in time and explore characterful shops and independent boutiques in a heritage shopping district.

In the centre of York, the Shambles is one of the best-preserved medieval streets in the world. It was mentioned in the Domesday Book of 1086 but many of the buildings date back to the late 14th and 15th century. The cobbled narrow streets feature overhanging timber-framed buildings that originally housed butchers’ shops (you can still see some of the authentic meat hooks attached to the shop fronts). In some sections it’s possible to touch both sides of the street with your arms outstretched. The area is now home to quirky gift shops and cafes.  Getting there: York is a two hour train ride from London King’s Cross, and an hour and 15 minute train ride from Manchester. 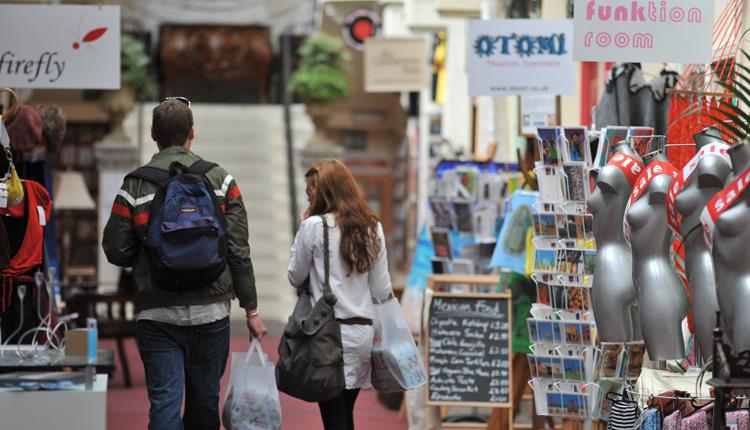 A short walk from Bristol’s iconic Clifton Suspension Bridge, Clifton Village is a posh suburb with a thriving shopping quarter. Most of the independent shops and boutiques occupy beautiful Georgian buildings, and you’ll find stores selling everything from cool furniture and quirky gifts to food hampers and traditional toys. In the heart of the neighbourhood, Clifton Arcade is a stunning Victorian mall lined with a collection of tiny stores. Refuel at one of the area’s historic pubs with a pint of local cider.  Getting there: Bristol is served by an international airport. The city is a two hour train ride from London, and a one hour 30 minute train ride from Birmingham.

Leeds has a fantastic shopping scene, with a range of high street stores, a modern mega-mall, and a number of major department stores. Its Victorian shopping arcades are packed full of character and are lined with a great mix of shops, from designer boutiques to hip cafes. Thornton’s Arcade was the first to be built in 1878 and features a beautiful neogothic facade. Inside you’ll find indie shops such as OK Comics and cool menswear store, Chimp. The Queen’s Arcade has a magnificent four-storey frontage and is home to high street favourites including Levi’s, Office and Jones the Bootmaker. The most famous arcade is the Victoria Quarter. It was created by Frank Matcham, the designer behind the London Palladium theatre and the London Coliseum, and features golden mosaics, marble flooring and intricate ironwork. Under a stunning stained glass roof you can shop for designer gear from shops such as Mulberry, Vivienne Westwood and Louis Vuitton.  Getting there: Leeds is a two hour and 15 minute train ride from London King’s Cross, or it’s 50 minutes on the train from Manchester. 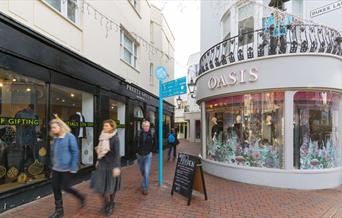 Close to Brighton’s seafront, the Lanes is a maze-like collection of narrow alleyways lined with boutiques, cafes, restaurants and pubs. The area once formed the heart of the fishing town of Brighthelmstone, long before the area became Britain’s coolest seaside town. Many of the buildings date back to the 18th century and the colourful shops sell everything from fashion and jewellery to artwork and vintage homeware. On sunny days you can dine alfresco and listen to live music from one of the area’s many buskers. North Laine is a bohemian quarter home to more than 300 independent retailers and some impressive street art, including Banksy’s iconic Kissing Policeman piece. Getting there: Brighton is a one hour train ride from London Victoria or London Bridge.

The historic Merchant City area of Glasgow developed in the 1750s when wealthy merchants (known as ‘tobacco lords’) built residences and warehouses here. It’s now one of the city’s most fashionable neighbourhoods as the Victorian buildings have been converted into cool shops and eateries. Ingram Street forms part of the city’s Style Mile and is home to designer stores including Mulberry, Armani and Ralph Lauren. Elsewhere you’ll find bridal boutiques, vintage clothing stores and jewellery shops. Merchant Square is a stylish indoor hub with a courtyard surrounded by bars, cafes and restaurants. It hosts a weekly craft fair with around 70 stalls selling items from Glaswegian artisans. Getting there: Glasgow is four hours and 30 minutes by train from London, and a one hour train ride from Edinburgh. The city also has its own airport.

In the shadow of Cardiff Castle, the Castle Quarter features three beautiful shopping arcades that date back to 1885. The Castle Arcade is split over two levels and has a striking balcony, and public walkways, High Street Arcade features gothic architecture, and Duke Street Arcade is a protected Edwardian building.

All arcades are lined with shops selling gifts, jewellery, books and clothes. Getting there: Cardiff is served by an international airport. The city is a two hour train ride from London Paddington.