New Orleans Is A Great City To Visit Year-round

NEW ORLEANS, LA — New Orleans may be best known for its Mardi Gras festival held over two weeks every February but in fact it is a fun place the rest of the year as well. Mardi Gras culminates on Shrove Tuesday each year with a huge parade through the Vieux Carre or French Quarter with colorful floats, wonderful costumes, and excited crowds who are bombarded with ‘gift’s thrown from the floats. Party time is king.

As the birthplace of traditional jazz the tradition is carried on at many venues throughout the city and nowadays there is competition from a vast array of other music spilling out from bars and eateries and even in impromptu groups on street pavements. You see some very strange sights as you wander round the area, semi naked exhibitionists mingling with party goers well primed for ‘fun’.

The modern history of New Orleans dates back to 1718 with some years of French or Spanish control until 1803. The city has been in American hands since the defeat of the British garrison in 1815 in the Battle of New Orleans. The city rapidly developed as a major port close to the mouth of the Mississippi River and has been thriving ever since although the disastrous Hurricane Katrina in 2005 did enormous damage to infrastructure and with considerable loss of life. The city is only now really recovering from that setback.

The most famous part of the city is the French Quarter with its narrow streets lined with distinctive houses with iron trellis balconies. The streets are a ‘catalog’ of places well known to all jazz enthusiasts eg Bourbon St, Canal Street, St Louis St, Basin St etc. Bourbon Street is probably the busiest and rowdiest but there you will also find the Musical Legends Park with statues of famous jazz artists including Pete Fountain, Al Hirt and Fats Domino.

Bands play there from around 10am to 10pm and you can listen for free or drop a note or two in the box in appreciation. When I was there a trip of piano trombone and drums was joined (ad hoc) by a trumpeter and they had a real blast. The park is famous for Café Beignet serving beignets, a traditional New Orleans delicacy made from deep-fried choux pastry.

Another feature of the French Quarter but closer to the river is St Louis Cathedral next to Jackson Square. The cathedral is the oldest in North America dating from 1720 and is the seat of the Roman Catholic Diocese of New Orleans. It is notable for its triple steeples towering above its historic neighbors, the Cabildo and the Presbytere. Jackson Square, named after General Andrew Jackson, is a restful oasis of greenery in the bustling city. General Jackson became a national war hero after defeating the British in New Orleans during the War of 1812. Jackson was elected the seventh president of the United States in 1828.

Originally built as a residence for the Capuchin monks of the cathedral the Presbytere has served many purposes and most recently is an excellent museum featuring two themes; the history of Mardi Gras both in rural areas as well as New Orleans itself and most dramatically the horror and recovery from Hurricane Katrina. On the opposite side of the cathedral is the Cabildo which focuses more on local history; it was the site of the Louisiana Purchase transfer ceremonies in 1803, Nearby the busy French Market is great for a snack or souvenirs.

One of the most recognizable features of New Orleans is the trolley cars which are a real favorite with tourists (and locals). There are three different lines of which the best known is the one west from the French Quarter along St Charles Ave leading to the Garden District and beyond. You can buy day passes or single tickets; the exact fare is required. The trolley cars are a great way to explore New Orleans or alternatively try the hop on hop off tourist bus which encompasses most of the main attractions. 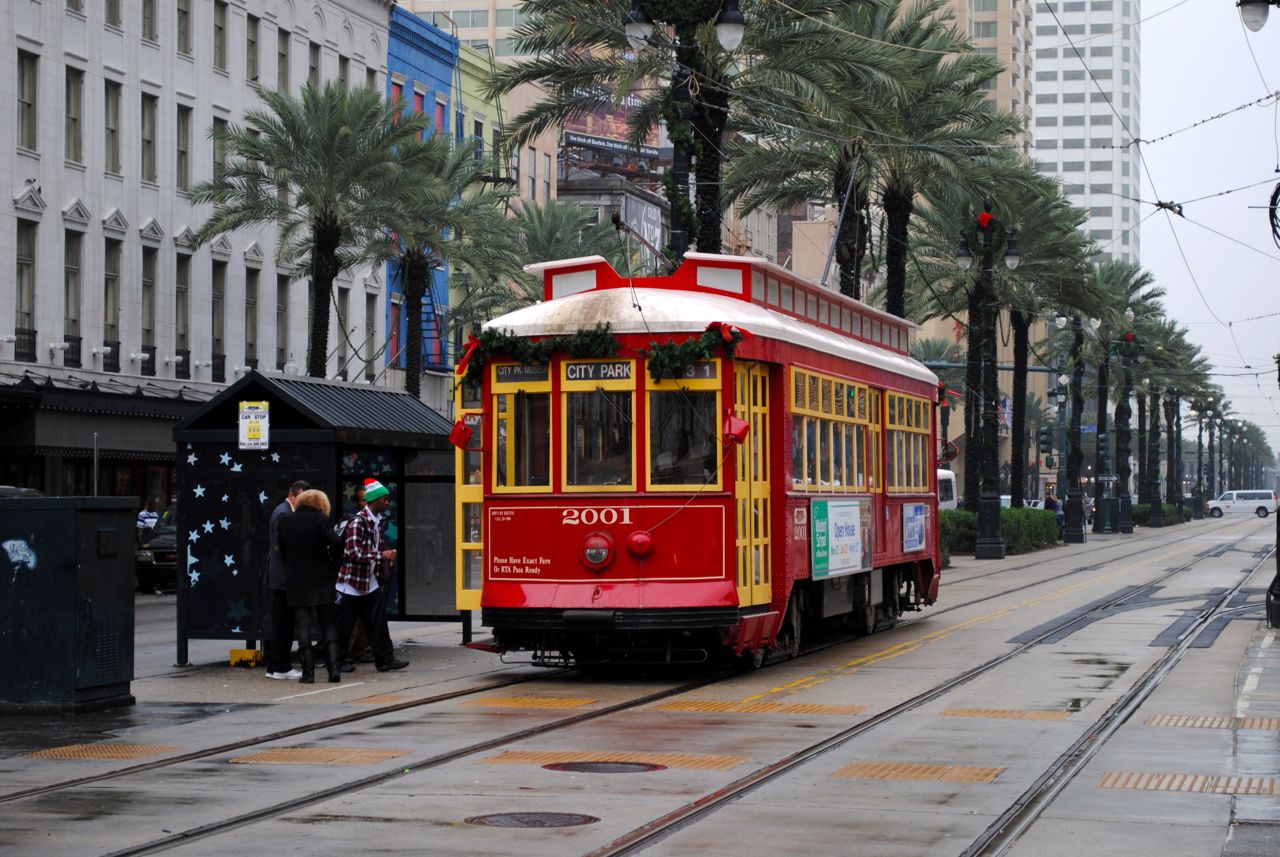 St Charles Ave is lined with a succession of large, solid and wonderfully designed mansions, most are double story or more set in nice gardens. About five kilometres along the route you pass two superb constructions Loyola University and Tulane University two of the best known and top universities in the state of Louisiana.

However there is a lot more to the Garden District which famously encompasses a 12 by 12 block area bounded on two sides by St Charles Ave and Magazine St but in fact there are more wonderful mansions further along in Uptown. It is worth picking up a map of the Garden District to learn the history of some of the mansions and also the famous Lafayette Cemetery in the centre (tours available). There are many house-like tombs in the cemetery some serving the same family for generations.

There are many huge and quite glorious mansions but for modern visitors the most remarked is the so called ‘Benjamin Button’ house at 2707 Coliseum St which was used as the nursing home in the film The Curious Case of Benjamin Button starring Brad Pitt. If you get hungry exploring the Garden District the elegant Commander’s Palace restaurant across the road from the cemetery is highly recommended.

A bit further out beyond the Garden District is the well regarded Audubon Zoo, a great place for kids of all ages. The site of a zoo since 1884 Audubon Zoo provides displays for around 2000 animals in their natural habitats. My favourites were the cute otters, alligators in a very swampy pool and a most regal looking jaguar that stared at me disdainfully. The Audubon Nature Institute also manages the Aquarium of the Americas closer to the centre of the city.

Not everyone can be in New Orleans for Mardi Gras but you can get a great idea of the wonderful floats and costumes and other paraphernalia by visiting the excellent Mardi Gras World which provides a magic behind the scenes glimpse of the insight, work and preparation that goes into the event each year. Floats, costumes, large scale cartoon and TV characters, sportsmen and other celebrities all in amazing details mainly made out of wood and paper mache. Since 1947, Blaine Kern Studios has built breathtaking parade floats not only for Mardi Gras in New Orleans but for parades all over the world.

The Mississippi River is famous for its riverboats and some of these are used as casinos since gambling was legalised in Louisiana in 1992. For many tourists a cruise on one of the riverboats with their distinctive ‘paddles’ at the rear is not to be missed. I took the two hour dinner cruise on the Steamboat Natchez and although the Dukes of Dixieland Jazz Band was excellent darkness precluded much sightseeing.

New Orleans is real Cajun/Creole territory with wonderful food – try the crawfish and gumbo. There are many excellent restaurants throughout the city, the choice is enviable.

Roger Allnutt was assisted in New Orleans by the New Orleans Convention and Visitor Bureau. For more information check www.neworleanscvb.com