LOS ANGELES, CA — Nancy Davis Reagan, former First Lady of the United States, died this morning at her home in Los Angeles at the age of 94. The cause of death was congestive heart failure. 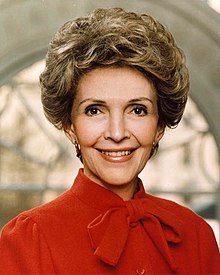 Mrs. Reagan will be buried at the Ronald Reagan Presidential Library in Simi Valley, California, next to her husband, Ronald Wilson Reagan, who died on June 5, 2004.  Prior to the funeral service, there will be an opportunity for members of the public to pay their respects at the Library.  Details will be announced shortly.

In lieu of flowers, Mrs. Reagan requested that contributions be made to the Ronald Reagan Presidential Library and Foundation at www.reaganlibrary.com.

For continuous information on the week’s events, please visit the Reagan Library’s web site at www.reaganlibrary.com.

A biography of Nancy Reagan is below.

Nancy Davis Reagan was born on July 6, 1921, in New York City. Raised in Chicago, she graduated from Girls’ Latin School and went on to Smith College, Northampton, Mass., where she graduated in 1943.

In her early career, Nancy Davis worked as an actress in stage, film and television productions. In 1949, she signed a seven-year contract with MGM. During this time, she met Ronald Reagan and they were married on March 4, 1952. She made eleven films in all, including three after her marriage. Her last film, at Columbia in 1956, was Hellcats of the Navy, the only film in which she and her husband appeared together.

Shortly after Ronald Reagan became Governor of California in 1967, Mrs. Reagan began visiting wounded Vietnam veterans and became active in projects concerning POWs and servicemen missing in action.  While First Lady of California, she made regular visits to hospitals and homes for the elderly, as well as schools for physically and emotionally handicapped children. During one of these hospital visits in 1967, she observed participants in the Foster Grandparent Program, a program which brings together senior citizens and handicapped children, and she soon became its champion. Later, as First Lady of the United States, Mrs. Reagan continued to help expand the program on a national level and promote private funding in local communities.

Upon becoming First Lady of the United States, Mrs. Reagan’s primary focus was fighting drug and alcohol abuse among youth. To spotlight the problem, she traveled nearly 250,000 miles throughout the United States and abroad in conjunction with her campaign to fight substance abuse. She appeared on television talk shows, taped public service announcements, wrote guest articles, and visited prevention programs and rehabilitation centers to talk with young people and their parents.

For ten years, Mrs. Reagan’s priority was caring for her husband at home as he battled Alzheimer’s Disease. Following his death in 2004, she was devoted to projects related to the Ronald Reagan Presidential Library in Simi Valley, California, where she served on the board of the Ronald Reagan Presidential Foundation, and promoted her husband’s legacy of leadership and freedom.

Nancy Davis Reagan was the only daughter of Dr. Loyal Davis and Edith Davis of Chicago and Phoenix.  She is survived by her brother, Dr. Richard Davis, and two children with Ronald Reagan – Patti Davis and Ronald Prescott Reagan, along with numerous nieces and nephews.