SAN FERNANDO VALLEY, CA — For a sophomore Congressman, Tony Cardenas (D-North Hollywood, Calif.) is certainly rising through the ranks in our nation’s capital. As the federal representative for Van Nuys and the North Valley, our Congressman has rapidly made a name for himself both in Washington, D.C. and on the national political scene.

Elected in 2012 to the U.S. House of Representatives, Cardenas had previously served on the Los Angeles City Council and in the California State Assembly for the better part of two decades.  After redistricting took effect in 2012, Cardenas was considered a shoe-in for the district, facing minimal political opposition even from other long-serving incumbent Members of Congress.
In 2012, the stage was set for most expensive race in Congressional history, but not for Tony Cardenas. Both sitting Congressmen Howard Berman and Brad Sherman opted to not run against Cardenas in the newly formed district, and instead chose to fight it out amongst themselves in another Valley congressional seat. This absence of big-name challengers is a testament to the community involvement and commitment of Cardenas, who by that time had become a fixture in San Fernando Valley politics and government.  For a Los Angeles City Councilman and former State Assemblyman to force two sitting Congressmen to run against each other instead of facing him in a political contest reiterates how powerful this gentleman had become.

The Van Nuys News Press had the chance to chat with the Congressman and ask him about serving in D.C., as well as what he misses about California. Congressman Cardenas reminded us that the weather in California is second to none, and the hot and humid summers back east really make him miss being back home.
Iran Deal — The major news of the day was the finalization of the deal with Iran. We  asked him about the process, and how this deal will work itself through Congress. Cardenas responded that the leadership in both the House and the Senate will present the deal to the members, and once that takes place the clock starts ticking on the 60-day deadline in which the legislative branch has to act and send the Iran Deal to the White House for the President’s signature.  “Our role on the world stage should be one of peacemaker, however, making peace in our interconnected world has never been more complicated,” said Cárdenas. “Negotiation is always the preferred option but we must ensure that any deal does not allow Iran to build a nuclear weapon. We do not know the exact details of this agreement and I look forward to closely evaluating it. I hope to see the framework of a truly effective, impactful treaty that will use transparent, constant verification, which will keep Americans safe, protect our allies in the region and lead to future stability.”

Low Income Solar Act — Congressman Cardenas also wanted to highlight his service on the very powerful House Committee on Energy and Commerce.  The Congressman was selected to serve after a long and arduous process within the democratic leadership.  As a second term Congressman, this committee appointment is significant and reflects on his ability to work with others in his party and across the aisle, as well as serve his constituents back home in the Valley.  The Congressman wanted to discuss his legislation to make it easier for low income Americans to go solar, and how we can all make the effort to go green and make positive change in the environmental realm.
Cárdenas, joined by his colleagues Keith Ellison (D-Minn.) and Barbara Lee (D-Calif.),
recently introduced H.R. 3041, the Low Income Solar Act (LISA), to establish loans and grants for low-income homeowners, creating grants to help them place solar panels on their own home or loans that would allow construction of, and access to, community solar facilities. 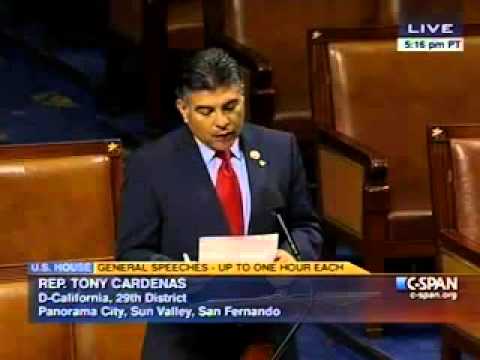 Thanks to the high cost of fossil electricity and the low cost of solar, it’s incredibly cost-effective for homeowners to install solar technology on their roofs. More than 20 gigawatts of solar capacity has been installed nationwide, enough to power more than 4.3 million homes. Unfortunately, low-income families frequently lack the capital to invest in solar, or do not have the infrastructure in their home to allow solar to be installed.
“Low income Americans are just like the rest of our nation: They are paying way too much for fossil fuel energy,” said Cárdenas. “My legislation will give them the opportunity to keep more money in their pocket and help America stop relying on countries who don’t like us for energy, while we keep more fossil fuels in the ground, where they belong.”
LISA would provide grants to low-income residents, to help lessen the cost of installing solar on their roofs. For those who cannot install solar, loans would be provided for companies to develop community solar facilities that would be linked to low-income homes.
Recently, the White House announced a new initiative to increase access to solar for all Americans, including low- and moderate- income communities, and expand opportunities join the solar workforce. This effort included setting a goal to install 300 megawatts of renewable energy in federally subsidized housing and providing technical assistance to make it easier to install solar, including clarifying how to use Federal funding.
Donald Trump — The other news story of the day was Donald Trump and his surge in the polls for the Republican nomination. The Congressman restated his disappointment in Trump’s racist comments, and how divisive such words can be. He acknowledged that such statements do lend a bit to Trump’s media savvy, and could play well to right wing tea party Republicans.
All Politics is Local — As Speaker Tip O’Neil once said, “All politics is local,” so we asked the Congressman about the Marilyn Monroe Post Office Bill.  This legislation was born out of a community impact statement passed by the Van Nuys Neighborhood Council, and calls for the post office off Van Nuys and Haynes to be renamed after local hometown star Marilyn Monroe.
The Congressman told us the process has been stalled by Congressman Darryl Issa, an advocate for post office reform who will not sign off on any post office being renamed without significant reform in that federal agency. The current rule to bring this legislation to the floor for a vote requires every member of the state congressional delegation sign the letter of support, and Mr. Issa is not inclined to support the measure at this time.  The Congressman said the effort will not be put on the back burner, and that he looks forward to advancing this measure to support the local community of Van Nuys and highlight the history of America’s first suburb.
Background — Raised by hard-working immigrant parents, Tony Cárdenas was brought up with simple ideals – that integrity and dedication were the keys to success. These are the qualities that he has brought to his 16 year career as a public servant for the people of the North East San Fernando Valley, and that he continues to offer today as a United States Congressman. Cárdenas has also been chosen to represent Los Angeles on the prestigious House Committee on Energy and Commerce, the oldest of the “authorizing” committees in the House.  (Pictured is Rep. Howard Berman & Rep. Tony Cardenas. For info, please visit www.cardenas.house.gov.)