Senate Bill 716 will ban bullhooks and other cruel training devices

SACRAMENTO, CA — A bill that will prohibit the use of bullhooks on elephants in California passed the Senate 29-7. The Humane Society of the United States, Oakland Zoo and Performing Animal Welfare Society applaud Sen. Ricardo Lara, the bill’s sponsor, and the Senate for taking this historic step forward. SB 716 now heads to the Assembly.

Nicole Paquette, vice president of wildlife protection of The Humane Society of the United States stated: “We commend the state Senate and Sen. Lara for taking this landmark step in protecting elephants from inhumane treatment. California, a longtime leader in protecting all animals, is now poised to be the first state to do away with the archaic and abusive training methods that travelling shows and circuses use on elephants. ” 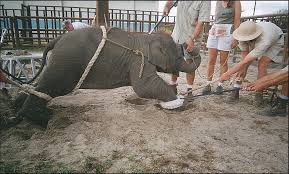 Joel Parrott, DVM, director and CEO of the Oakland Zoo stated: “Oakland Zoo could not be happier to hear that Sen. Lara’s SB 716 passed the senate floor today. This is a major victory for elephants, as they deserve our compassion and respect. No AZA accredited zoo in California uses the bullhook, a truly outdated tool in the management of elephants, when the alternative Protected Contact was created over twenty years ago. We would like to thank the California Association of Zoos and Aquariums for their continued support and for being a leader in the welfare of elephants.”

Ed Stewart, president of the Performing Animal Welfare Society stated: “We commend the California Senate for its vote to prohibit the bullhook, a cruel and archaic weapon used to control elephants through fear and pain. The vote reflects evolving public sentiment across the country that rejects the inhumane treatment of elephants for frivolous entertainment. PAWS thanks Sen. Ricardo Lara for his leadership on this important welfare issue and for promoting greater respect and protection for all elephants.” 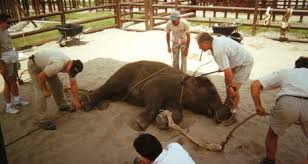 Bullhooks, which resemble fireplace pokers, have a long handle, sharp metal hook and spiked tip that causes pain, suffering and fear in elephants. No sanctuary or California zoo accredited by the Association of Zoos and Aquariums uses bullhooks on elephants. We thank these organizations for their continual progressive stance on the well-being of captive elephants. SB 716 is also supported by the California Association of Zoos and Aquariums, the City of Oakland, the City of San Francisco, the Elephant Sanctuary, leading elephant scientists and other leading animal and environmental protection groups.