“The Purple Line will ease traffic along the congested Wilshire corridor and will make traveling from the westside to downtown faster and greener,” said Eric Garcetti, Mayor of Los Angeles and Metro Board Chair. “When it comes to infrastructure, L.A. is on the move. We are right now investing 36 billion dollars in our transportation infrastructure to ease congestion and create thousands of jobs. All together, this is the largest public works project in the nation. In the car capital of the world, we are looking to reduce traffic and cut air pollution by giving peole car-free options to get to work and play.”

The Purple Line Extension is a critically important rail project that is partially funded by the 2008 Measure R sales tax that was overwhelmingly approved by two-thirds of L.A. County voters. The first segment of the subway is expected to be completed in 2023 with a project budget of $2.821 billion. In addition to this local funding, Metro received a $1.25 billion Full Funding Grant Agreement (FFGA) from the Federal Transit Administration to help pay for the first segment. The U.S. Department of Transportation also granted Metro a low-interest loan of $856 million from a Transportation Infrastructure Finance and Innovation Act (TIFIA) to complete the funding package for the project’s first phase. Combined, these nearly $2 billion in project commitments represent the biggest federal transportation investment for a single construction segment in the history of Los Angeles County.

The remaining $821 million in project funding for the first segment includes Measure R, City of Los Angeles local funding, and other existing local and federal funds. 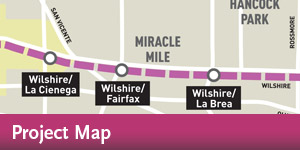 “Today we launch the construction of the first subway segment along the Wilshire corridor to West Los Angeles,” said Los Angeles County Supervisor and Metro Board Member Zev Yaroslavsky.  “No transit corridor in our region is in greater need of mass rapid transit.  The area to be served is one of the most dense employment centers in the county and is plagued by some of the worst traffic congestion in the country.   This groundbreaking is long overdue and will be well received by people who work and live in the Westside.”

“Breaking ground on the Purple Line extension is an important step toward completing this key transit option for Angelenos, which will help relieve congestion and boost the local economy,” said U.S. Senator Diane Feinstein. “I applaud the efforts of everyone who helped us reach this point, but we have work left to do. The federal government is committed to providing $1.25 billion of the $2.8 billion cost for phase one, but future phases will require an estimated $3.5 billion. I will continue to strongly support federal funding to complete this important transit project.” 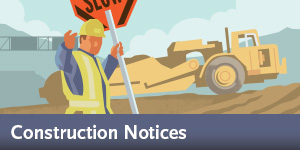 The project is planned to be built in three sections.  Section 2, which will include Wilshire/Rodeo and Century City stations, is scheduled for completion in 2026.  Section 3, which will include Westwood/UCLA and Westwood/VA Hospital stations, is planned to open in 2035.  When all three project sectionss are complete, the Purple Line will extend westward from Wilshire/Western for nearly nine miles with a total of seven new stations.

Metro is currently seeking additional federal funding that could accelerate subway construction for Section 2 in the form of a $1.1 billion grant from the federal New Starts program, and a $307 million low-interest loan from the federal TIFIA program.

“Los Angeles has made enormous strides to expand transportation options and accelerate construction of projects that will create jobs, improve mobility, and spur economic growth,” said U.S. Senator Barbara Boxer.  “The Purple Line Extension is another major accomplishment.  I am proud that the TIFIA Program from MAP-21 provided key financing of $856 million that enabled this project to move forward.”

“The Purple Line extension puts Angelenos to work building a 21st century transit system for our city,” said U.S. Congressman Xavier Becerra. “Connecting the Westside to the greater Los Angeles area by subway will create over 25,000 jobs, increase ridership and result in a boon for our local economy. This project is the right investment that will keep Los Angeles on the move.”

Over 300,000 people travel into the Westside every day for work from throughout the region.  More than 100,000 people leave the area for outside destinations.  These numbers will increase over time.  The Purple Line is expected to provide a much needed transit alternative for traveling to and from West Los Angeles, one of the county’s most densely populated, job-rich areas.  The area is also home to major world-class destinations.

“I’m delighted that construction on the Purple line extension is beginning,” said U.S. Congressman Henry Waxman.  “This rail link will fundamentally change how the people of L.A. get around and provide a direct route to some of the great sites in the Westside.  After section one is finished, you’ll be able to hop on the subway downtown and visit the La Brea Tar Pits, the Los Angeles County Museum of Art, the Petersen Automotive Museum and Restaurant Row.”

“The Purple Line Extension will continue to make Los Angeles a great place to work, live and play,” said U.S. Congresswoman Karen Bass. “This extension is an example of what can happen when federal, state and local leaders all work together—bringing billions of dollars into the Los Angeles economy and creating thousands of jobs over the next decade, while building on a vital rail line that will benefit Angelenos for generations.”

“The subway extension project is important not just for the Westside, but for the entire region,” said Pam O’Connor, Santa Monica Mayor and Metro Board member. “Whether you’re traveling to or from West L.A. making the trip will be easier by utilizing the Metro system that connects Angelenos through virtually every part of the county.”

The Purple Line extension also will offer improved connectivity to the entire Metro Bus and Rail network, as well as municipal bus lines and other regional transportation services. It is just one of several projects designed to improve transit options and mobility in the  area. Other planned improvements

“This project’s groundbreaking is the culmination of many years of consensus-building on the Metro Board,” said Ara Najarian, Glendale City Council member and Metro Board member. “Our Board unanimously supported the design and construction of the Purple Line Extension, and we are very glad to see construction begin as we make Los Angeles County a world-class destination with rich transit amenities.”

Metro is a multimodal transportation agency that is really three companies in one: a major operator that transports about 1.5 million boarding passengers on an average weekday on a fleet of 2,000 clean air buses and six rail lines, a major construction agency that oversees many bus, rail, highway and other mobility related building projects, and it is the lead transportation planning and programming agency for Los Angeles County.  Overseeing one of the largest public works programs in America, Metro is, literally, changing the urban landscape of the Los Angeles region. Dozens of transit, highway and other mobility projects largely funded by Measure R are under construction or in the planning stages. These include five new rail lines, the I-5 widening and other major projects.  Stay informed by following Metro on The Source and El Pasajero at metro.net, facebook.com/losangelesmetro, twitter.com/metrolosangeles and twitter.com/metroLAalerts and instagram.com/metrolosangeles.

Destination of the Week Family and food Featured/Main article Travel

Destination of the Week Family and food Featured/Main article Travel