Chilling In Cochin In The Kerala State Of India

COCHIN, INDIA — A group of nuns flutter around the famous Chinese fishing nets at the mouth of Cochin harbor and the fishermen joke with them. Are they praying for better times for the fishermen or just there to purchase what is on offer?

The huge cantilevered fishing nets set up on teak wood and bamboo poles are the legacy of traders from the court of Kublai Khan and were erected between 1350 and 1450AD. Watch them being operated from the promenade on the waterfront. Stalls sell fresh delicious seafood and there are plenty of souvenir stalls there too. The nets are especially dramatic as the sun sets over the Arabian Sea starkly silhouetted against the red rays. 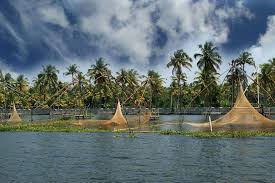 Cochin is a major harbor, port and naval base situated in the state of Kerala and about 150 miles from the southern tip of India. It was settled by the Portuguese in the early 1500s and over the years became a major trading post. The explorer Vasco de Gama who discovered the sea route to India round the Cape of Good Hope died at Cochin in 1524 and was buried there before his remains were transferred to Portugal in 1538.

The original part of Cochin developed round Fort Cochin (Kochi) and this area is where most of the old monuments and historic buildings are found. St Francis Church, where Vasco de Gama was buried, was established by the Franciscans in 1503 (the oldest European church in India), became a Protestant church when the Dutch were in power and an Anglican church after the British occupation. Nearby Santa Cruz Cathedral, which contains some beautiful paintings, serves the Catholic faithful.

Close by the old quarter of Mattancherry is a maze of narrow lanes surrounded by high houses. Built in 1568 the Jewish Synagogue has a rich interior with huge chandeliers in coloured glass. The floor is tiled with blue willow pattern tiles brought from Canton in China in the 18th century. In the streets outside are many curio shops and places selling spices for which Kerala is famous.

Next door is the lovely Dutch Palace (actually built by the Portuguese) of the Cochin rajas. The walls of the palace are adorned with wonderful murals depicting scenes from the Ramayana and in the large coronation hall costumes, palanquins and other royal trappings are exhibited.

The large harbor of Cochin in dotted with islands and the ferries plying between them are a cheap way to get about, not to mention the excellent views from on board. Vypeen Island opposite Fort Cochin at the mouth of the harbour is home to many local fishermen while on Bolgatty Island the picturesque Bolgatty Palace, built as a residence by the Dutch in 1744, is now a luxury hotel complete with golf course.

Willingdon Island is in fact man-made, created with material dredged while deepening the harbor. It is mainly used as a naval base, railway terminus and customs area but at its tip is found the lovely Taj Malabar Hotel. I stayed there and it is highly recommended – friendly service, relaxing ambiance and fantastic food at the hotel’s restaurants. They have a nightly sunset cruise for guests round the harbor and also a performance of local traditional Kathakali dance drama.

On the ‘mainland’ side of the harbor is the bustling commercial center of Ernakulam, narrow streets jammed with traffic of all kinds both human and mechanical, tiny shops and stalls selling everything under the sun. Whole streets are devoted to one type of merchandise.

Inland from Cochin, the coastal plain is crossed by a number of waterways and these backwaters are a popular place for sightseeing. Houseboats can be hired complete with crew who do all the work, including preparing sumptuous meals, while you sit back and relax admiring the passing scenery.

On land the roads pass rubber plantations and through numerous bustling towns before climbing into the hills of the Western Ghats. Tea and coffee are grown together with a variety of spices for which this part of Kerala is famous. Cardamom, pepper, cloves, nutmeg, vanilla, allspice and cinnamon grow prolifically and many local shops sell ‘strings’ of sachets of different spices (usually 15 or 18) that make a great souvenir.

The main center is round Thekkady that is also close to famous Periyar Wildlife Sanctuary. Cruises on man-made Periyar Lake in the center of the sanctuary are popular with elephants, otters and a huge variety of birds always on show. Tigers and leopards are sometimes seen but are more elusive.