The Royal Hawaiian Is The “Pink Palace Of The Pacific”

May 11, 2014 The Pink Palace Of The Pacific, The Royal Hawaiian, Visit Oahu

OAHU, HAWAII — The opening of The Royal Hawaiian, a Luxury Collection Resort, ushered in a new era of luxurious resort travel to Hawaii.  The hotel was built at a price tag of $4 million. The six story, 400 room structure was fashioned in a Spanish Moorish style, popular during the time period and influenced by screen star Rudolph Valentino. 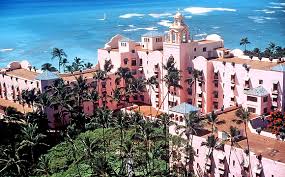 The site of The Royal Hawaiian boasts a majestic lineage.  The area was used as a playground for King Kamehameha I after he conquered the island of Oahu.  Queen Kaahumanu’s Summer Palace was previously located in what is now the hotel’s Coconut Grove garden. During WWII, The Royal Hawaiian was leased exclusively to the U.S. Navy as a rest and recreation center for the Pacific Fleet.  The hotel reopened to the public in February 1947. 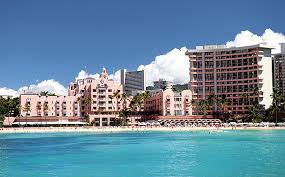 The inspiring and distinctive character of The Royal Hawaiian, a Luxury Collection Resort is known throughout the world as a destination of unparalleled romance and luxury. The “Pink Palace of the Pacific” recently emerged from a complete renovation on January 20, 2009 as one of the world’s elite collection of hotels for luxury and romance.

The distinctive architecture and its rosy hue remain, as do the elegant details nod to the hotel’s storied past.  Now, however, 21st century upgrades seamlessly meld with the thoughtfully chosen, classic design elements, creating a decidedly chic atmosphere that is still captivatingly Hawaiian.
This “re imagined” luxury resort highlights the indigenous culture and history of the islands with its new guest programs, offering authentic and enriching experiences, refined service, and an elevated ambiance of unrivaled facilities and location.
Guests have the opportunity to discover something new each day at The Royal Hawaiian by taking part in and learning various cultural activities such as hula lessons, hula therapy, coconut demonstration, ukulele lessons, lauhala basket making, Hawaiian quilting, lei making, and yoga. 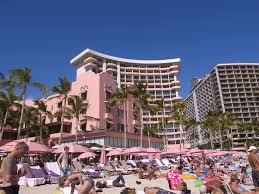