Maui Is A Natural Treasure

MAUI, HAWAII — Maui is a microcosm of the world’s climates and terrains. You can see this from the airplane before you set foot on the island, and after you land, within an hour or two, you can witness its diversity as you travel from the starkness of a lava flow to the luxuriant green of a rain forest.

Time and distance have set Maui apart. The Hawaiian Islands are the most remote places on earth, 2,500 miles away from the nearest continent. And Maui is young. Humans roamed the rest of the world for a million years before the massive volcano known as Haleakala emerged from oceanic depths to form the eastern portion of the island. Most of another million years would pass before humans set foot here 1,500 to 1,700 years ago.

What the first Hawaiians found was an untouched world.

Life arrived on Maui by wind, wing and water, but mostly by chance – a new plant or animal perhaps every 10,000 years. On this island, with its wealth of ecological niches waiting to be filled, life exploded into new forms and varieties that had never existed before. Amid Maui’s evolutionary wonders are a seabird that burrows underground to build its nest, tree snails with shells as decorative as Christmas ornaments, and a plant, distant cousin to the sunflower, that thrives as a silvery sphere in the moonscape of Haleakala Crater, eventually sending a stalk of flowers as much as eight feet into the air.

For all its tenacity, life here is fragile. Evolving in isolation, native plants and animals lost their natural defense. The introduction of alien species has threatened the survival of endemic ones; Hawaii is home to more than one-third of the birds and plants on the U.S. Endangered Species List. But Maui is lucky. Less than 25 percent of the island’s 729 square miles is inhabited, and conservation partnerships in east and west Maui vigilantly monitor Maui’s watersheds and wilderness.

Partnerships by conservation groups, major landowners and corporations, and Federal, State and County governments are helping to ensure that tomorrow’s generations will enjoy the abundant blessings of today. 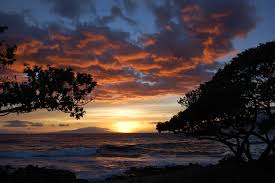 The most ambitious of these projects is the East Maui Watershed Partnership, a pioneer endeavor by Federal, State and County governments, the Nature Conservancy, Hana Ranch, Haleakala Ranch, and East Maui Irrigation Company. The partnership oversees 100,000 wilderness acres from Kipahulu, on the island’s eastern tip, to Makawao, Maui’s cowboy country; from the 10,023-foot summit of Haleakala National Park, to the Keanae coast. Through conservation easement, resource management and the removal of destructive alien species, the East Maui Watershed Partnership protects one of the largest remaining tracts of native forest in Hawaii. It also protects the highest concentration of rare and endangered birds in the world.

Similar partnerships by The Nature Conservancy of Hawaii, State of Hawaii, Maui Land & Pineapple Company, Kamehameha Schools, C. Brewer and Company, and other private entities are protecting vital watersheds in the West Maui Mountains – and with them, flora and fauna that are unique to the area. These species include a rare Hawaiian violet, growing in the summit bogs of Puu Kukui, the tallest peak in the West Maui Mountains; and native ohia trees only a few inches high, whose lehua blossoms grow as large as those of 50-foot ohia trees found elsewhere in Hawaii. 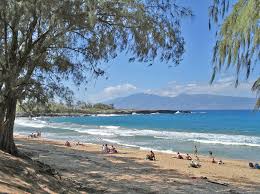 Ultimately, these partnerships protect the island’s very life. Surrounded by thousands of miles of ocean, Maui depends on rain for almost all of its fresh water. What catches the rain, absorbing it like a sponge and allowing it to seep gently into underground streams and aquifers, is Maui’s increasingly fragile rain forest. Without the trees, mosses, ferns and other undergrowth, rains would race down the mountainsides, washing fertile soil into the ocean, smothering the reef, and endangering other estuary life.

Native Hawaiians understood this inextricable link between mountain and sea. Their traditional land divisions, or ahupuaa, ran from summit to shore, ensuring each village access to fishing grounds, agricultural lands and forests. Maui’s contemporary conservation efforts are similarly working to preserve both land and ocean resources. 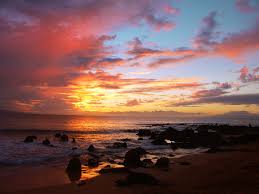 In West Maui, Kapalua Resort has joined forces with the New York Audubon Society to institute conservation practices that have turned its championships fairways into sanctuaries for island birds.  The two Kapalua courses are “Certified Audubon Cooperative Sanctuaries, the only one in Hawaii, that meet the Audubon Society’s stringent certification standards for use of water, fertilizer and pesticides; and the reintroduction of native flora to preserve natural habitat.

On the leeward side of the island, the emerald fairways of the Wailea Golf Club are kept green by a system of brackish, non-potable water wells managed by a sophisticated system of computers and radio transmitters that minimizes energy, water and waste, and by thoughtful landscaping that favors the natural climate of the area.

Decades ago, Maui Land & Pineapple Company launched efforts to have two of the five crescent bays along the coast of its Kapalua Resort declared marine preserves. Today, Honolua and Mokuleia Bays have been designated marine-life conservation districts by the State of Hawaii. Snorkelers, swimmers and divers share the bay and its lava and coral formations with Hawaiian reef fish, manta rays and green sea turtles.

In the waters off Wailea Resort, on Maui’s southern coast, lies the marine preserve of Molokini, the exposed rim of a submerged, extinct volcano. Molokini’s clear, protected waters attract colorful and curious pelagic fish and the equally curious divers and snorkelers who sail out to meet them each day.

In 1992, Congress established the waters surrounding the islands of Maui County as a marine sanctuary; an act that is helping Maui’s biggest endangered species pull back from the brink of extinction.

Humpback whales migrate each year between Hawaiian waters and the Arctic Circle. The Arctic provides a rich feeding ground, but it’s here in Hawaii that the whales mate and bear their young. In 1900, an estimated 15,000 humpback whales existed in the North Pacific. By 1968, when a ban was finally placed on hunting them, only about 1,000 humpbacks remained. Thanks to efforts by such organizations as the Pacific Whale Foundation, humpbacks are making a determined comeback. Scientists believe that about 10,000 humpback whales come to Hawaii each year.

From November until May, Maui’s waters teem with these majestic giants. Indeed, Maui is one of the few places in the world where you can watch the whales from shore. Sometimes you can hear the whale song simply by swimming or floating on the water. To protect them, thrill craft such as jet skis and parasails are prohibited during whale season. All ocean vessels are required to stay at least 100 yards away from the whales, but as visitors aboard whale-watching cruises will happily tell you, no restrictions keep the whales from coming up to investigate the boats.

Between the deep blue sea and the skies above Haleakala, Maui offers visitors a host of opportunities to explore nature – both for learning and for play.

The Hawaii Nature Center, located in Iao Valley, conducts educational hikes and hands-on activities that teach young and old about the valley’s flora and fauna. The center’s Interactive Nature Museum and Rainforest Walk are designed to interpret and experience Hawaii’s natural history in a museum setting and a natural environment. 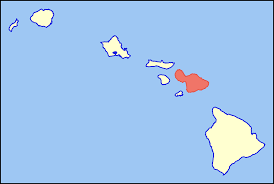 Increasingly, Maui’s resorts have been going “back to nature” by planting endangered Hawaiian flora, restoring historic sites, creating nature trails, providing educational signage and literature, and hiring staff historians and wildlife experts to enlighten all who are interested. Even a round of golf can be a trek back to an earlier Hawaii. At Wailea Resort, the Gold Course is landscaped with indigenous foliage such as natal redtop grass and wiliwili trees, and bordered by rugged lava rock formations and old Hawaiian stone walls.

Across the island, hiking opportunities abound, whether you select a self-guided option or choose tours with the many companies that offer group and customized hikes.  Pick the climate and terrain you prefer. You can trek across Maui’s most recent lava flow along the coast at La Pérouse; or climb Haleakala and descend for a hike into the crater’s backcountry. At Keanae Arboretum, on the way to Hana, a loop trail leads from taro fields into pure jungle. The Lahaina Pali Trail affords a rugged but scenic hike along sea cliffs, with spectacular views of Maui and her sister islands. The trail follows a road that historians believe was part of the Alaloa, the “long road” that Piilani, a 15th century chief, and his son Kihaa Piilani directed to be built to encircle the island. A selection of hiking maps and guide books is available, and you can also sign on with an excursion company for a guided hike, complete with lunch. 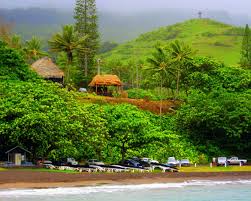 Maui has a network of bike paths throughout the island. One bikeway follows Maui’s meandering leeward coast from Wailea Resort to Kapalua – a distance of 40 miles each way. The North Shore Greenway enables cyclists to travel a scenic ocean path all the way from the business district of Kahului to the plantation town of Paia. For off-road cycling, there’s a bicycle trail at Polipoli Springs State Recreation Area, not far from Haleakala’s summit. Hundreds of people of all ages also coast down from the summit of Haleakala. Excursion companies will take you to the crater by van for a view of sunrise and provide bicycle, helmet, all-weather gear, and an informative guide.

Maui’s horseback-riding stables are located from sea level to 4,000 feet up the slopes of Haleakala. Equestrians can enjoy different types of rides, including treks into the volcano’s caldera.

Campers may pitch their tents at several beach parks, among them the State park at Waianapanapa, near Hana, where the beach is made of black sand and pebbles. Another State park with camping facilities, Polipoli Springs, is in a high, redwood forest preserve with stunning views of the south Maui coast. Haleakala National Park offers campsites both inside the crater and along the coast at Kipahulu; three wilderness cabins in the crater are available on a lottery basis.

Humans are part of the ecosystem, too. More than a millennium before the arrival of Europeans in these islands, Hawaiians built a thriving and complex civilization, adapting nature, but religiously respecting it, too. Archaeological sites have been discovered all over Maui, some easily identified and accessible to the public, others preserved in private, both for posterity and for cultural use by Maui’s indigenous people. Notable archaeological sites include Halekii and Pihanakalani Heiau (stone platforms that served as temples), located in the town of Wailuku. Kamehameha the Great, the Hawaiian king who united the islands, is said to have performed the last human sacrifice on Maui at Pihanakalani. Also, Piilanihale Heiau in Hana, Hawaii’s largest heiau, dating from the 14th century; and an archaeological district along the shoreline trail at La Pérouse, where a thriving collection of Hawaiian villages existed prior to the island’s most recent lava flow in 1790.