AMSTERDAM, THE NETHERLANDS — When I think of all the fun I’ve had in Amsterdam, I don’t even know where to start.  And for those of you who think of a coffee shop in the red light district, that is Amsterdam too, but the heart and soul of the city are near the canals and in the eateries.  And there is one restaurant in particular that once you eat there; it will be on your list for almost every meal until you leave the Netherlands.  The Doner Factory Dana located at 245 Damrak is the perfect place to pick up a Gyro and put some sloppy sauce on that bad boy.

Now it took my lady and I a couple of tries to figure out what was going on, and we had eaten there before, but this one time it dawned on me everyone was not putting mustard on their Gyros.  Up by the front of the counter, where you place your order and come pick it up, there are quite a few standard issue ketchup and mustard bottles, like the ones you would see on a street vendor’s hot dog cart.  So the first couple of times we ate there, we just got the wraps or Gyros, and didn’t sauce them up.  Then, like a Pink Floyd song, I caught a glimpse out of the corner of my eye, and saw a different type of sauce coming out of the mustard bottle, something that looked like Tzatziki.  Well, as it turns out, it not only was Tzatziki, it was the best tasting Tzatziki I have ever had in my whole entire life.

Everything changed, the Gyro changed, my trip to Amsterdam changed, and my happiness level shot through the roof, our trip had been a huge success.  We came to see tulips, take canal rides, walk the museums and reflect on history.  Yes, it was all that and more, the coffee shops were hip and happening, the red light district is interesting to say the least and worth a walk around, but this Tzatziki is second to none, and cannot be missed on your next trip to Amsterdam.  It is so delicious; I would eat it by itself.

When we travel to Amsterdam, which I’m trying to make a habit of, we usually stay at the Hotel Amsterdam De Roode Leeuw.  It is centrally located in the historical heart of Amsterdam, and there is really no better place to set up your home base and get your vacation popping.  The hotel is very accessible and has a unique location in the middle of the entertainment, business, financial and shopping districts. 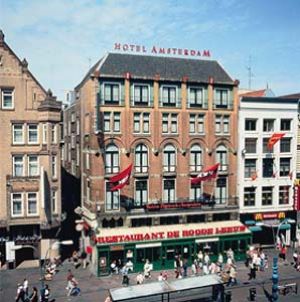 The best part about staying there for me is how close Hotel Amsterdam is to the Famous Dam Square.  This is the spot most people consider the true center of Amsterdam.  The hotel is literally fifteen seconds walking from this historic plaza.  My lady and I found it utterly fascinating to just watch people at the Famous Dam Square.  They also have action heroes and monsters that dress up and interact with the crowd.  It was a bit like being in front of Mann’s Chinese Theater in Hollywood.

Another nice thing about the hotel and the location is you do not have to figure out the transportation system or hire a taxi once you leave Amsterdam Central Station.  The hotel is 700 meters down the main street, and easily walkable.

Once we checked in to our hotel, bothered the people down the street with the great Tzatziki, and got our “I Amsterdam” cards, we were off to sightsee and enjoy the fine Dutch Society & Culture.  Now I love a good boat ride, and in our “I Amsterdam” booklet came a couple of passes for a canal ride.  We were on it, and not only does the canal ride relax you and let you sightsee all over the city, it also comes with a Captain who is usually full of factoids and lots of Dutch history. 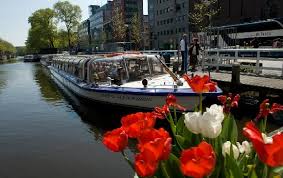 This was the perfect way to start off our weekend in Amsterdam, why not get acclimatized with a tour through the canals?  The boat ride took about an hour, and we went around Amsterdam Central Station, by Anne Frank’s House, and throughout most of Amsterdam.  The entire city is built over water, and is officially way below sea-level.  It is the series of dikes and dams that maintain everything, hence the name Amsterdam.

Well, I found the canal tour quite informative, and it helped us get our bearings.  Since we picked up the “I Amsterdam” passes, and they came with public transportation tickets, this time around we were going to figure out the trams and get out and about.  Our first order of business after the canal tour was getting to the Heineken factory.

We were getting a tour of where this famous beer gets brewed, bottled, and consumed.  I was hoping to help in all of the processes.  Well, like crazy tourists in a city we just barely knew, we ventured onto one of the street trains and took it towards the Heineken factory.  Well, of course we got lost, but now there are different levels of lost.  We weren’t completely lost; we were just mildly on the other side of where we are supposed to be.  Sometimes you get on the wrong size of a canal, then it meanders off in a different direction, and if you follow it, you meander off as well.

So after walking around in circles for forty five minutes, we finally found ourselves, and it was outside of the brewery.  So that’s nice, and we were off to go make some beer.  Well, the tour was a lot longer than I anticipated and turned out to be very through and informative.  It was extremely in depth, with hands on displays and a really cool short movie about the brewing process.

But the best part was the bar at the end of the tour.  On your wristband they give you two tickets to redeem at the bar, and guess what they are serving?  Well, to my amazement I found this Heineken a lot more delicious that the ones back home.  So being the beer expert that I am, an inquiry was made and the bartender told me it was due to the freshness.  Apparently, the first 3 days after a Heineken is made is when it is the most delicious.  This is not to say that the ones you get in America are bad, not even close, however, an on tap Heineken from the factory itself is without a doubt the best tasting beer in all of Europe.  I mean you could really taste the deliciousness and freshness, the beer was so crisp and new, like it was made this morning just for my afternoon tour.

Holy goodness, well I just couldn’t get over it, and since I had two tickets on my wristband, I had another beer.  So after all that fun we went back to our centrally located hotel and took a nap, day drinking will do that to you. 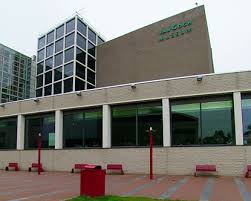 It took us a little while, but we finally got the hang of the public transportation system in Amsterdam.  And it is such a relief, because we were walking and walking, and not that all that exercise isn’t good for you, it is the weather you are trying to avoid sometimes.  One of the days we spent in Amsterdam we decided it would be better to just walk to the Van Gogh Museum instead of navigating the trams.  Well, that was stupid, because without umbrellas and anything waterproof at all, it started pouring rain.  Now this isn’t like heavy rainfall, it was like a constant stream of water coming from above.  I was soaked within twelve seconds.

And when it is cold, raining and you are soaked to the bone, the last thing you want to do is go to the museum.  So that is exactly what we did, we splashed by the IAMSTERDAM sign and marched right into the Van Gogh Museum.  I was just happy to be inside, and everyone else was dry but me and Joanne.  She had some parka or waterproof jumper on, so she wasn’t that bad off, but I looked like someone just pushed me into the pool. I went to the restroom and stood underneath a hand warmer for forty five minutes, and then it was off to enjoy the art.

That is another bonus about Amsterdam, the museums and art are some of the best in the entire world.  I actually enjoy the famous art in Amsterdam over Paris, it seems to have more soul.  Granted this could be debated and never resolved, but there is something about the collections in Amsterdam that really stand out in my mind.  Plus, they have tulips everywhere, so maybe it is the gardens outside the museums, and I know very little about art, and just like a nice flower bed of blooming tulips.

You can spend your time however you like in this beautiful city.  There is a lot to do, and taste and see all over Amsterdam.  I would however recommend getting a centrally located hotel, and at least hitting the Heineken brewery and a few museums.  It is well worth the twelve hour flight from LAX, and it is a great place to pick up some wooden shoes and a miniature windmill for your desk.  (For more information, please visit www.hotelamsterdam.nl and www.iamsterdam.com)